David Brewster - “Truths physical have an origin as divine as truths religious.” 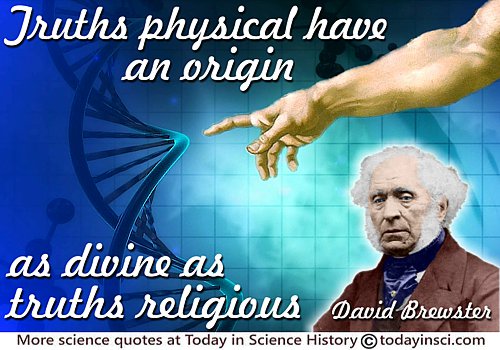 “Truths physical have an origin as divine as truths religious.”
— David Brewster
More Worlds Than One (1856) 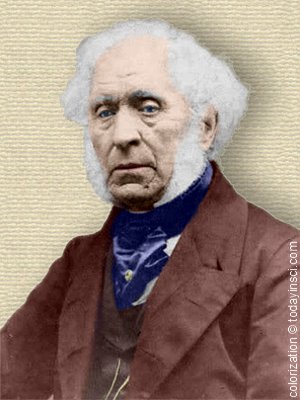 Context of David Brewster's quote “Truths physical have an origin as divine as truths religious.”

In his book More Worlds Than One, Sir David Brewster entered a controversy on the probability of extraterrestrial life. He set out to debunk a work by William Whewell, a Liberal Anglican, on the Plurality of Worlds. Brewster reviewed the status of knowledge and conclusions on the bodies of the Solar System. In a chapter titled “Religious Difficulties,” Brewster wishes to reconcile the adversarial state of science and religion in his time. (Darwin's Origin of the Species was published three years later, and that religious debate continues to the present day!) Brewster begins the chapter with the following as one paragraph, which contains the quote above:

“It is as injurious to the interests of religion, as it is degrading to those of science, when the votaries of either place them in a state of mutual antagonism. A mere inference or a theory in science, however probable, must ever give way to a truth revealed; but a scientific truth must be maintained, however contradictory it may appear to the most cherished doctrines of religion. ...”

“Christians, timid and ill-formed, have, at different periods, refused to accept of certain results of science, which, instead of being adverse to their faith, have been its best auxiliaries; and infidel writers, taking advantage of this weakness, have vainly arrayed the discoveries and inferences of astronomy against the fundamental doctrines of Scripture. This unseemly controversy, which once raged respecting the motion of the Earth and the stability of the Sun, and more recently in reference to the doctrines and theories of geology, terminated, as it always must do, in favor of science. Truths physical have an origin as divine as truths religious. In the time of Galileo they triumphed over the casuistry and secular power of the Church; and in our own day the incontrovertible truths of primeval life have won as noble a victory over the errors of a speculative theology, and a false interpretation of the word of God.”

“Science ever has been, and ever must be the safeguard of religion. The grandeur of her truths may transcend our failing reason, but those who cherish and lean upon truths equally grand, but certainly more incomprehensible, ought to see in the marvels of the material world the best defence and illustration of the mysteries of their faith.”

Quote from David Brewster, More Worlds Than One: The Creed of the Philosopher and the Hope of the Christian (1856), 132. (source)