[A summary of scientific discoveries and inventions relating to the air]

AIR or ATMOSPHERE. Anaximenes of Miletus (530 B.C.) declared air to be a self-existent deity, and the first cause of everything created. Posidonius (about 79 B.C.) calculated the height of the atmosphere to be 800 stadia. The pressure of air, about 15 lb. to the square inch, was discovered by Galileo, 1564, and demonstrated by Torricelli (who invented the barometer) about. A.D. 1643, and was found by Pascal, in 1647, to vary with the height. Halley, Newton, and others, up to the present time have illustrated the agency and influences of this great power by various experiments, and numerous inventions have followed; among others, the Air-Gun of Guter of Nuremberg about 1656; the Air-Pump, invented by Otto von Guericke of Magdeburg about 1650; improved by Robert Boyle in 1657, by Robert Hooke about 1659; [ Sprengel’s excellent air-pump, in which water or mercury is employed, was invented in 1863] and the Air-Pipe, invented by Mr. Sutton, a brewer of London, about 1756.. The density and elasticity of air were determined by Boyle; and its relation to light and sound by Hooke, Newton, and Derham. The extension of our atmosphere above the surface of the earth, has been long considered as about 45 miles. Its composition, about 77 parts of nitrogen, 21 of oxygen, and 2 of other matters (such as carbonic acid, watery vapour, a trace of ammonia, &c.) was ascertained by Priestley (who discovered oxygen gas in 1774), Scheele (1775), Lavoisier, and Cavendish; and its laws of refraction were investigated by Dr. Bradley, 1737. The researches of Dr. Schönbein, a German chemist of Basel, between 1840 and 1859, led to his description of two states of the oxygen in the air, which he calls ozone and antozone. In Aug., 1894, at Oxford, Lord Rayleigh and Professor Ramsay reported to the British Association their discovery of a new gas in air, afterward termed Argon. Dr. Stenhouse’s Air-filters (in which powdered charcoal is used) were first set up at the Mansion House, London, in 1854. In 1858, Dr. R. Angus Smith made known a chemical method of ascertaining the amount of organic matter in the air, and published his “Air and Rain” in 1872.

The Aero-steam Engine, the invention of George Warsop, a mechanic of Nottingham, who, by employing compressed air united with steam, is said to have effected the saving of 47 per cent. of fuel. The plan was reported to the British Association, at Exeter, in Aug. 1869, and was said to act successfully in a tug steamer (for China) in the Thames, 26 March, 1870. Mr. Edward Field, in his new motive power, introduced a small volume of steam into a large volume of heated air, and effected an economy of 12½ to 20 per cent. of steam. The system was exhibited in London, July, 1891.

An air-telegraph, in which the waves of air in a tube are employed instead of electricity, invented by sig. Guattari, was exhibited in London in 1870. It obtained a gold medal in Naples.

Isaac Wilkinson patented a method of compressing air by a column of water in 1757, and William Mann patented stage pumping by compressed air in 1829. The force of compressed air was employed in boring the Cenis tunnel (see under Alps), and in making the Blackwall tunnel, 1891-7. 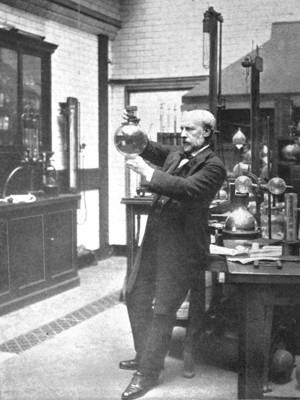 Air, as well as its gaseous components, has been compressed into the liquid state by means of great pressure and intense cold, 1877-8, by Raoul Pictet of Geneva, and Cailletet of Paris, Dec. 1877, Jan. 1878. At the Royal Institution, 5 June, 1885, professor James Dewar exhibited liquid air obtained at the temperature of -192° Cent. In March, 1893, he produced solid air in the form of ice. Several physical properties of liquid air were exhibited, and solid air was produced at the Friday meeting, 19 Jan. 1894.

Prof. Dewar gave six well-illustrated lectures on “Air, gaseous and liquid,” at the Royal Institution, London, 28 Dec. 1893 - 9 Jan. 1894. (Some of the air of the room was liquefied in the presence of the audience, and remained so for some time, when enclosed in a vacuum jacket); again, 1 April, 1898.

Prof. Dewar demonstrated by some very remarkable experiments the intimate connection between phosphorescence and photographic action of the electric light on bodies cooled to the temperature of boiling liquid air at the Royal Institution, 18 Jan. 1895.

M. Paul Giffard, inventor of compressed air and other apparatus, died, abt. 8 April, 1897.

The Aerograph, an air brush, an application of compressed air, invented by Mr.C. L. Burdick (1893); used by artists.

Dr. Linde’s machine for the liquefaction of air, shown at the Society of Arts, 14 March, 1898.

“Lord Rayleigh and professor Ramsay had discovered four other aërial elements, helium, neon, krypton and xenon, which were identified as constituents of the atmosphere by prof. Ramsay and M. H. Travers, 1895-1900.”

Prof. Dewar exhibited air in the solid state and a jet of liquid air rising to about 6 ft., with beautiful effects, before the prince and princess of Wales, 6 June, 1902.


Image, not in original text, added from source shown above. Text from Benjamin Vincent, Haydn's Dictionary of Dates and Universal Information Relating to All Ages and Nations (23rd Ed. 1903), 30.