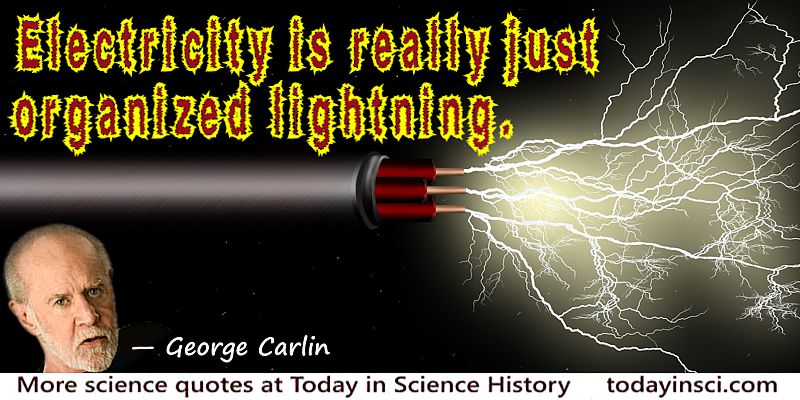 The subject quote, above, is an isolated witticism in his book, Napalm and Silly Putty, and there is no further context on the same subject therein. However, we can get some more insight into his thoughts on electricity, from a one of his standup acts, in which he said:

“This civilization of ours, that we’re so proud of, this civilization with its so-called civilized behavior—you ever stopped and realized how fragile all this is…how easily…[it would] break right down? Just break right down! Wouldn’t take much. Probably happen in less than two years. Wouldn’t take much … to throw us right back into barbaric times. All you’d have to do would be—eliminate electricity. That’s all. But…completely. Eliminate electricity. So, no electricity—no lights. You’re back to candles, lanterns, campfires and bonfires. Batteries couldn’t be recharged. Generators couldn’t be refueled, because fuel is pumped electrically. So is water, by the way, so no lights, no fuel, no water. No computers—and computers run everything. And among the many things that computers run that operate on electricity are all of the security systems…”

Carlin then went in the direction of the chaos in society when “suddenly, without electricity, all across America, the gates and cell doors of penitentiaries, and mental institutions, would fly open” releasing “the ones who’ve been away. ‘At camp.’” Then, having ended his reference to electricity, he continued with a dystopian vision of the resulting society.

That’s a comedy routine, but it does give food for thought. Of course, the time immediately before domestic electricity was reasonably comfortable and civilized, with historic advances in science taking place without it. Yet, it does leave the question, though purely philosophical: on putting the electrical genie back in the bottle, how would society move on without it?


Text by Webmaster, with the long quote transcribed from a YouTube video, and the subject quote from George Carlin, Napalm and Silly Putty (2002), 170. (source)