“Forests … Are the Very Lungs of the Planet” 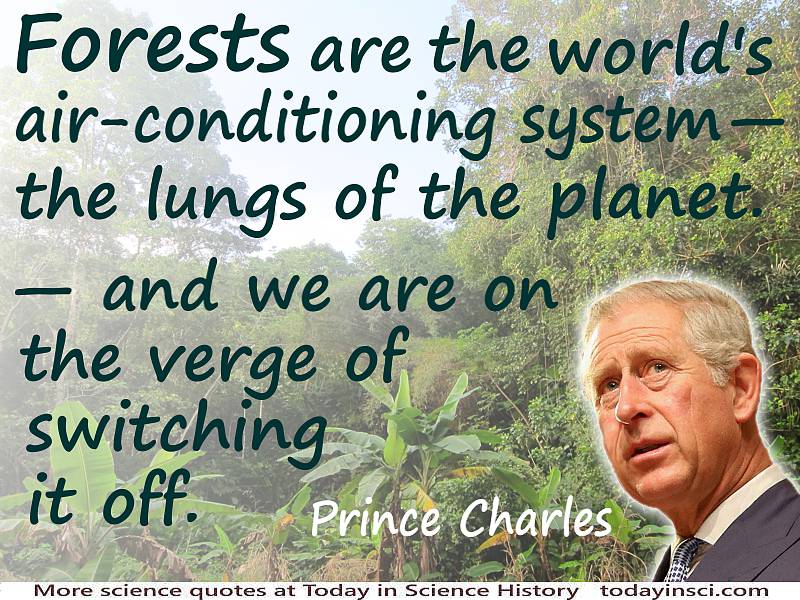 “Forests … are in fact the world’s air-conditioning system—the very lungs of the planet—and help to store the largest body of freshwater on the planet … essential to produce food for our planet’s growing population. The rainforests of the world also provide the livelihoods of more than a billion of the poorest people on this Earth… In simple terms, the rainforests, which encircle the world, are our very life-support system—and we are on the verge of switching it off.”
— Prince Charles
Speaking at the Presidential Palace, Jakarta, Indonesia (3 Nov 2008)

The Context of Prince Charles' “Lungs of the Planet” Quote

In Nov 2008, the Prince of Wales delivered the Presidential Lecture, at the Presidential Palace, Jakarta, Indonesia. His main themes were the stewardship of Nature, the global concern with climate change, and the need for the whole world to unite and “with a real sense of urgency and resolve to act together.” He focussed on the concept that forests:

“act as giant global utilities, providing essential public services to the whole of humanity. They are in fact the world’s air-conditioning system—the very lungs of the planet—and help to store the largest body of freshwater on the planet—water which, we have to remember, is essential to produce food for our planet’s growing population. The rainforests of the world also provide the livelihoods of more than a billion of the poorest people on this Earth, including many here in Indonesia. In simple terms, the rainforests, which encircle the world, are our very life-support system—and we are on the verge of switching it off. …

The Prince knew it was significant that “Nine per cent of the world’s remaining tropical rainforests are, of course, under Indonesia’s stewardship and so it is no exaggeration to say that your natural heritage is absolutely critical to the survival of us all.” He congratulated the Indonesian President for the initiatives he had taken to address the problems. “Indonesia itself has, I know, made significant efforts to tighten the management of your remaining precious rainforest, curbing illegal logging and restricting the expansion of oil palm plantations into forests which are used to realize an economic return from the timber.” Then the Prince explained the Rainforests Project he had started to help with funding, because:

“the rainforest countries need to re-orientate their economies so that the trees are worth more alive than dead.”

Firstly … developed countries must provide the rainforest nations with the right incentives, including payments, for the vital and irreplaceable giant public utility service which they provide to the rest of the world. Payments should have the characteristics of a commercial transaction, in the same way as we pay for our water, gas and electricity. In other words, they should not be aid. In return, the rainforest nations would provide eco-services such as carbon storage, freshwater and the protection of biodiversity. It is a key part of our approach that, just as for any other utility bill, the rainforest nations would be paid annually for the services supplied.

In conclusion, he said that:

“If we stop the destruction of our rainforests, we buy ourselves the necessary time to reconfigure our economies and to deliver the eighty per cent reduction in greenhouse gases that we must achieve by 2050 if Mankind is to have anything approaching a viable future on this planet. It is, I fear, as stark as that.”