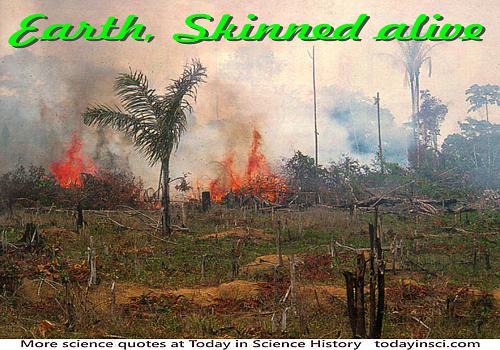 
“Earth, Skinned Alive” was the headline for a book review in the New York Times (1991)

Deforestation in the Amazon has taken place mainly in Brazil, where already about 20 percent of that country's Amazon rainforest has been destroyed. If felled trees and vegetation is left to rot, the carbon content of the formerly living matter will inevitably be converted to carbon dioxide. Fires used to clear the tree trunks, stumps and roots to make cropland produce the carbon dioxide more quickly. About 75 percent of Brazil's emissions result from rainforest clearing, amounting to an estimated 400 million tons of carbon dioxide released into the atmosphere each year. That makes Brazil at least the sixth-biggest contributor to the world's accumulation of that greenhouse gas.

Since 2000, as improved highway infrastructure facilitates moving timber out from illegal logging, and rising food prices stimulate clearing for mechanized crop farming and pastures for cattle, the government has struggled to balance the competing pressures of conservation and economic needs. In 2009, the then president Luiz Inácio Lula da Silva was outspoken about the developed nations:

“I don't want any gringo asking us to let an Amazon resident die of hunger under a tree. We want to preserve, but they will have to pay the price for this preservation because we never destroyed our forest like they mowed theirs down a century ago.”

What remains clear, is that razing of thousands of square miles of forests, whether in Brazil or a number of other countries, raises the amount of carbon dioxide put into the atmosphere, and significantly reduces the amount of plant life able to to remove it.