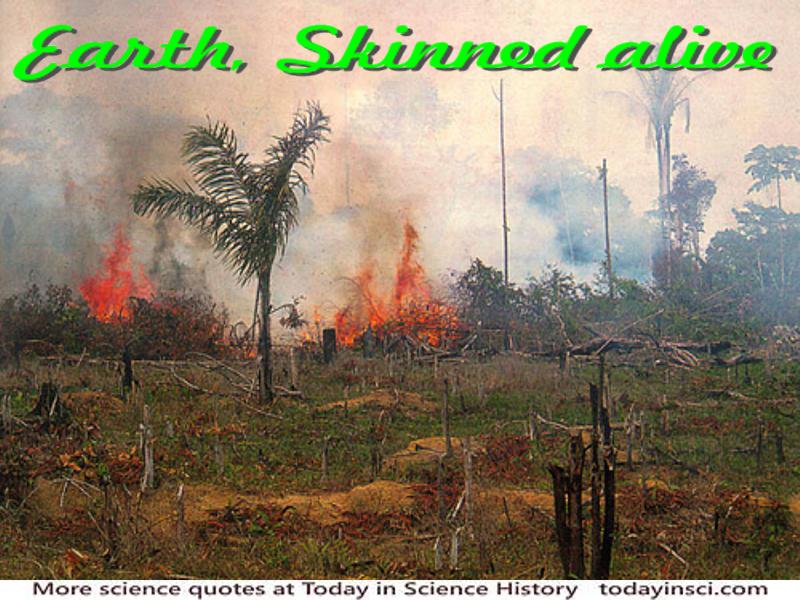 
“Earth, Skinned Alive” was the headline for a book review in the New York Times (1991)

When studying the deforested areas of Amazon forest, satellite imaging, together with field observation, is able to distinguish between clearing used for pasture and conversion to crop planting. In a 2006 report published in the Proceedings of the National Academy of Sciences that examined cropland expansion in Mato Grosso (the Brazilian state with the highest rate of deforestation), a strong correlation was found between the amount of land deforested and soya bean prices. As prices rose, conversion to mechanically worked cropland increased, while pasture use declined.

Clearing forests to create cropland involves complete removal of the original biomass. Fires that are used to burn tree trunks, stumps and woody roots, consume the carbon content of the former living material, and release significant amounts of carbon dioxide, the greenhouse gas. The area exposed changes the interaction of solar energy at the land surface, heating patterns, and the cycling of the water, The expected result is warmer, drier conditions. Pasture land use causes less dramatic changes than cropland, but even pasture is more harmful to the factors affecting climate than if the forest canopy had been left intact.

From Stephen J. Pyne in New York Times (21 Apr 1991), BR19. (The book being reviewed was Kenton Miller and Laura Tangley, Trees of Life: Saving Tropical Forests and Their Biological Wealth.)