The Cape Cod Inventor of the Square-Bottom Paper Bag Machine...
...And A Lot More!

Although the plastic grocery bag has upstaged them for now, the square-bottom paper grocery bag has been around well over a century. Compact fluorescent light bulbs are replacing the incandescent bulb. Each of those four objects had an inventor. Can you name one of them?

Nope, not Thomas Edison—he only perfected a practical construction and manufacturing process for the incandescent light bulb that had been invented before him by the Englishman, Joseph Swan. It was at a lecture in Newcastle upon Tyne on 18 Dec 1878 that Swan first publicly displayed his lamp, but he had been working on his idea since 1850, when Edison was merely a three-year old tot.

Edison’s patent for his version of the light bulb was issued on 27 Jan 1880. He also perfected self-promotion, so his name remains well-known today. The U.S. patent for the square-bottom paper bag manufacturing machinery was issued eight years earlier, on 20 Feb 1872 to Luther Childs Crowell. Although his name is somewhat remembered mostly around his home town in Cape Cod, Crowell is not a household name, even though his product is.

In fact, Luther Crowell was a prolific inventor, holding over 280 patents in his lifetime, which makes him a person that deserves more recognition.

Luther Crowell’s roots in cape Cod began when his ancestors Yelverton and Thomas Crowell settled there in 1638. A few generations later, on 7 Sep 1840, Luther was born to Francis Baker Crowell and Mehitable Hall Crowell (who, interestingly, had the same surname before marriage, though were not related). Luther was born in West Dennis, Massachusetts, as his mother was before him.

After local schooling, attending an academy and spending a year studying medicine with a physician, it was no doubt the proximity of his hometown to the sea that influenced Crowell to join the merchant marine service. Although he put in a four-year term, and did well enough to be offered a captain’s commission (which he turned down), he abandoned that career.

He had become interested in aeronautics. This was a time when ballooning was a mature activity. The hot air balloon was invented in France in 1783, and it was followed in the U.S. by 1784 with the first American (tethered) flight in Baltimore. The history of photography also began in France when the first photo picture, as we know it, was taken by Joseph-Nicéphore Niepce on a summer day in 1826. Those two inventions came together, at America’s centre of innovation—Boston—when the first U.S. aerial photograph was taken in 1860 by James W. Black, from the Queen of the Air balloon owned by Samuel Archer King.

And it was to Boston that Luther Crowell headed within a year of leaving the merchant marines. There, he devised an “Aerial Machine” for which he took out his first patent, No. 35,437, issued on 3 Jun 1862. This was forty years ahead of the Wright Brothers’ first powered flight at Kitty Hawk (17 Dec 1903). 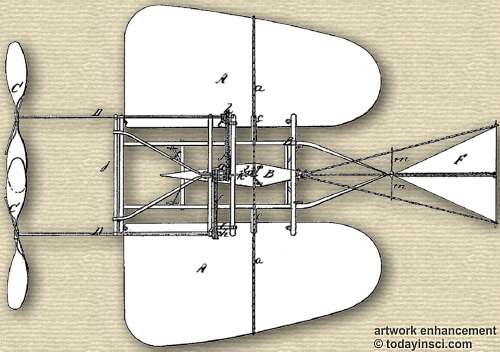 Looking at Crowell’s patent, it is notable that he did not design anything like a balloon, or a kite, or a glider. It had “wings composed of a light substantial frame work” covered with “material impervious to air or gas” which could in use be filled “with hydrogen or other suitable gas.” Crowell provided his creation with two “propellers, which are intended to revolve in opposite directions’’ arranged so that their “shafts can be turned down in a horizontal or up in a vertical position without interrupting their rotary motion.” He provided a rudder for steering. Operators would ride in a car, which contains an engine (presumably a steam engine).

Anticipating the advanced VTOL (Vertical Take-off and Landing) aircraft that eventually flew almost a century later (1957), Crowell planned wings that were hinged to stow vertically or deploy horizontally. Thus, he said in the patent “When it is desired to ascend with this machine … the wings are turned … and the propeller-shafts are turned up in a vertical direction, and when the desired height is attained and it is desired to progress in a horizontal direction the wings are raised and the propellers lowered.”

Of course, it didn’t work. Worse, his financial backers lost interest, so he lost his chance to refine his understanding of wings, propellers and steering and perhaps beat the Wrights with his own powered flight.

For this invention, he had to devise ways to handle paper through his machine. Which led to handling the paper folding needs of a newspaper printing press. This achievement overlapped with the needs of the of the printing press manufacturer, R. Hoe & Co., which offered Crowell both a substantial sum of money for the rights to use his patented methods and a liberal salary to devote his talents to their needs in designing printing equipment.

Which needs another chapter to continue to cover the activities of this remarkable inventor. Meanwhile, check out the full Aerial Machine patent description and diagrams - next.