Thomas Edison - “Genius is not inspired. Inspiration is perspiration.” 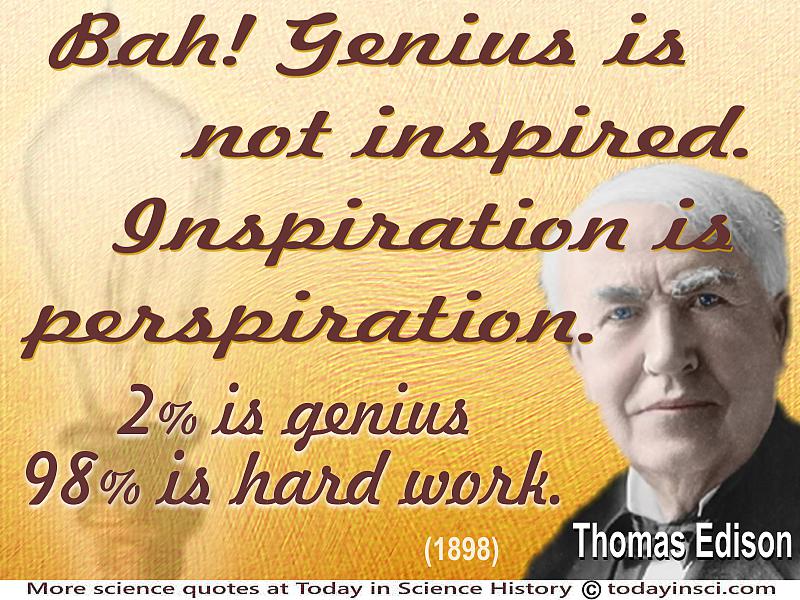 “Genius is not inspired. Inspiration is perspiration. [At another time Edison defined genius thus:] Two per cent. is genius, and ninety-eight per cent. is hard work.”
— Thomas Edison
Ladies Home Journal (Apr 1898) 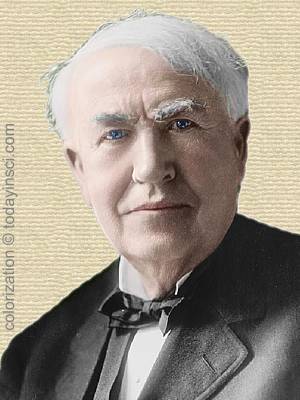 Context of Thomas Edison’s quote “Genius is not inspired. Inspiration is perspiration.”

The Ladies Home Journal in Apr 1898 profiled Thomas Edison with “A Group of Stories of the Great Inventor and ‘Wizard of Menlo Park,’ as Told by His Intimate Friends.” The article stated that the stories “so far as is known, are now printed for the first time.” It gave the two versions, shown above, of Edison's definition of genius. Another version also quoted as Edison's motto came in the Scientific American (27 Dec 1902):

The magazine described this as “the incisive, epigrammatic answer [Edison] once gave to a man who thought that a genius only worked when the spirit moved him. Yet it must not be supposed that Edison is deficient in imagination. Every great inventor must have something of the poet in him; for without a most lively fancy, he could never see the possibilities of his own creation.”

“Genius is 1 per cent. inspiration and 99 per cent. perspiration.”

It is accompanied there with another another variant:

“Stuff! I tell you genius is hard work, stick-to-itiveness, and common sense,”

An expanded variation, also giving the 1 to 99 ratio, was presented by an Edison engineer, Samuel Insull, in a 1919 speech, who said he had asked Edison about the meaning of genius, and received this reply:

“Well, about 99 percent of it is a knowledge of the thing that will not work. The other 1 percent may be genius, but the only way I know to accomplish anything is everlastingly to to keep working with patient observation.”3

However, as with many familiar aphorisms, the idea may have evolved from an earlier expression. Kate Sanborn, in her Memories and Anecdotes (1915) wrote: “In my special class at home… One morning my theme was ‘Genius and Talent.’ I said Genius was something beyond—outside of—ourselves, which achieved great results with small exertion. … Talent must work hard and constantly for development. I said: ‘Genius is inspiration; Talent is perspiration.’ I had never heard that definition and thought it was mine. Of late it has been widely quoted, but with no acknowledgment, so I still think it is mine. Are there any other claimants—and prior to 1880?” Indeed, her earlier claim was recorded in the Detroit Journal, as cited in the Philadelphia newspaper The Times on 23 Dec 1892 (p.4).