[p.785] MEDICAL history has been recorded largely in terms of mice and men. That is to say, credit for the great achievements of medicine have been attributed almost wholly to certain outstanding scientists. Even the physicians’ laboratory cohorts, white mice, have in many instances been glorified for their roles in the fight against disease. And yet the history of medicine contains the names of many laymen whose contributions have gone unnoticed, despite the fact that they loom large in the development of the healing art. The man on the street does not know that few contributions to medical progress are of more importance than those made by boys and girls, from premature infants to adolescents. It is time for these little medical heroes to be rescued from obscurity!

James Phipps, a lad of eight, was perhaps the first child to fulfill a crucial role in the annals of medicine. Prior to the introduction of vaccination against smallpox, this disease took a sweeping toll of lives. Smallpox was indeed the monarch of all diseases, and the entire world was its empire. But in 1796 Edward Jenner, a kindly English physician who resided in the village of Berkeley, decided to test a theory which he had evolved for the control of smallpox. This theory, which had engrossed Jenner’s thoughts for twenty-five years, was based upon a statement which a patient had made to him during the early days of his medical apprenticeship. While discussing smallpox, the patient remarked: “I cannot have that disease, because I have had cowpox.”

Jenner never forgot that statement; and when he returned to his native village to practice medicine, he discussed the subject with his neighbors. There he found that the people of the countryside held the same belief. Jenner studied this problem “long and sorely,” and he came to the conclusion that cowpox was simply a modified form of smallpox, and that the mild form of the disease protected human beings from the severe or fatal type of smallpox. Desiring to test his theory on a scientific basis, he wrote to his famous teacher, John Hunter, for advice. Hunter replied: “Don’t think, but [p.786] try; be patient, be accurate.” This was the spur Jenner needed to carry on with his investigation.

On May 14, 1796, Jenner took some matter from the hand of a milkmaid who had become infected with cowpox while milking her master’s cows. This matter was rubbed into two superficial scratches on James Phipps’ arm. The child suffered no discomfort, and on the first day of the following July, virulent matter from a smallpox lesion was carefully rubbed into James’ arm. Just as Jenner expected, the child did not develop the disease, thus proving to him beyond question the possibility of smallpox vaccination.

It is not known how Jenner happened to select an 8 year old boy for the initial experiment. But it is quite possible that James’ parents had been protected from smallpox because they had recovered from cowpox, and realized there was no great risk involved in having James undergo the test. Unfortunately, no record exists of the conversations that must have taken place between Jenner and young James, a record which would have revealed much about the relationship between the kindly village doctor and his young friend. Although Jenner was sure that James would suffer no ill effects, he must have experienced many uneasy moments before the test was completed.

The story of this discovery is one of the classics of medicine, and Jenner is ranked as one of humanity’s greatest benefactors. But young James who helped to halt the plague was never honored.

Jenner, however, never forgot the service which this child rendered to science. In later [p.787] years, he built James Phipps a home, complete even to a flower garden which Jenner laid out and stocked with roses.

There were other children besides James Phipps who helped medical men to spread the practice of vaccination around the globe. Spain was one of the first nations to recognize the benefits of smallpox vaccination; and quite naturally the Spanish government was eager to introduce this protective measure to the people of its colonies in the New World. Accordingly, an expedition “for the propagation of vaccination throughout the universe—to friend and foe alike” set sail in 1803 under the direction of the Surgeon-Extraordinary to the King of Spain. The cargo of this ship was perhaps the most amazing that has ever sailed the seven seas! On board were 22 unvaccinated children who were to be vaccinated at intervals during the voyage. Methods of preserving vaccines were unknown then, and the only way in which a supply of the vaccine fluid could be maintained was to transmit the protective cowpox matter from the arm of one child to another! Two children were vaccinated each week to insure a supply of the fluid. This romantic expedition circumnavigated the globe, to return home three years later, after stopping at the Canary Islands, Puerto Rico, South America, Cuba, Yucatan, Mexico, China, the Philippine Islands and many other distant lands. Everywhere this “glorious and noble enterprise” was welcomed with religious pomp and ceremony.

The demand for vaccination, however, was so great that it was necessary to add to the pilgrimage 26 additional children to increase the supply of vaccine. It is impossible to estimate the extent of the blessings which these little medical heroes spread throughout the world. Yet there is no record of any reward or recognition having been given to the children who made possible this vaccination crusade. Perhaps, as we say today, they merely went along for the ride! 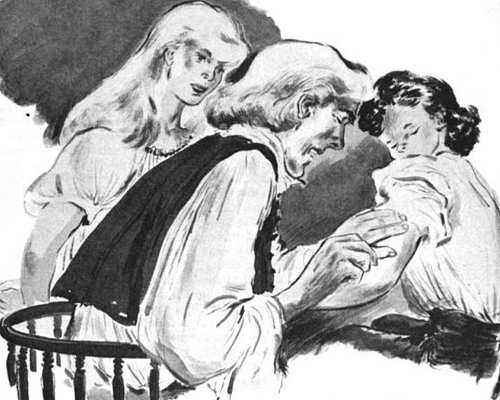 News of Jenner’s great discovery was not long in reaching North America. The printed reports concerning vaccination, however, were received by the public with indifference. They looked upon this discovery as a medical whim that was here today and would, in all probability, be gone by tomorrow. But this was not the attitude of Benjamin Waterhouse, Professor of Theory and Practice of Physick [medicine] at the University of Cambridge, Massachusetts. Waterhouse was quick to estimate the advantages of the discovery, and began to collect and study every important publication on the subject. After corresponding with Jenner to obtain first hand information concerning vaccination, Waterhouse published an article in the Columbian Sentinal on March 12, 1799, under the heading “Something Curious in the Medical Line.” This article, however, failed to arouse much public interest in vaccination.

“Evidently,” Waterhouse said, “distance of space operates on some minds like distance of time. People are not ready to believe what happened a great while ago, or a great way off. I therefore find it necessary to bring the matter home to us and to repeat in America the experiments performed (by Jenner) on the other side of the Atlantic.”

Since Waterhouse was thoroughly convinced of the efficacy and safety of vaccination, he decided to introduce the practice in America by vaccinating his own children. Thereupon, he secured a supply of the protective cowpox matter from Bristol, England.

The first person in America to undergo vaccination was Waterhouse’s 5 year old son, Daniel Oliver Waterhouse. The cowpox material was rubbed into a scratch on the child’s arm by his father, according to Jenner’s instructions. “My boy went through the procedure in so slight a manner as hardly to express any remarks of peevishness,” wrote Waterhouse. Daniel’s 3 year old brother was vaccinated next, and he likewise “went through the procedure in a perfect and satisfactory manner.” Then a 12 year old servant boy was vaccinated. He suffered no ill effects, with the exception of “a stiffness of the muscles in the neck, which soon vanished with the help of a few remedies.” Finally, Waterhouse’s infant daughter, “already weaned and 1 year old,” was given the protective treatment, and she, too, “went through the procedure with regularity,” he wrote.

Later, when these children “were in the plentitude of health,” they were inoculated with smallpox matter, but the disease did not develop in any of them. Twelve days later the children were dismissed, and Waterhouse exclaimed: “A fact like this is worth a thousand arguments!” Thereafter, the practice of vaccination spread rapidly in American communities.

Thus, one of the most valuable of all protective measures against disease was established largely because doctors enlisted these little medical heroes to fight and conquer smallpox.