An Underground Alliance — A Tunnel to Connect England and France 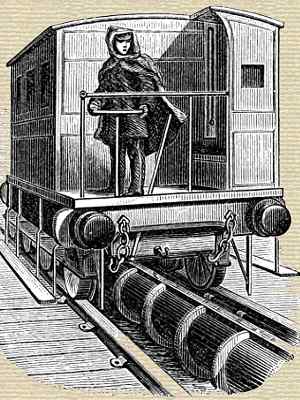 Train on Brunel's South Devon atmospheric railway showing, between the rails, the 2-ft diameter vacuum pipe used for propulsion. The top of the pipe had a lengthwise slit, sealed with leather flaps. A strong arm attached to the carriage passed under the flaps and through the slit to a piston inside the bore. When a powerful pump ahead of the train reduced the air pressure in the tube, atmospheric pressure on the trailing side of the piston pushed it and the train forward. (source)

When Mr. Isambert Brunel1 projected the Thames Tunnel, people first scoffed at the feasibility of the undertaking, and then, when the great engineer demonstrated its practicability, by achieving his plan, they took to wondering of what earthly use this great expensive underground gallery could possibly be.

For a long time, we confess, we were rather skeptical of the practical benefit to he derived from Mr. Brunel’s splendid whim. We knew that certain people sold cakes and candy by gas-light in the Thames Tunnel to wondering country people, who paid their sixpences to walk through that great damp, moldy gallery; but there it seemed as if the commercial uses of the Tunnel ended. Now we know better. The successful accomplishment of the Thames Tunnel has directed the scientific mind in that line, and the result has been that we are, in five years from this time, to have a tunnel beneath the English Channel, running from Boulogne to Dover.

M. Favre, a distinguished French engineer, accompanied by several hydrographers and engineers, has lately been employed in surveying the neighboring coasts, and taking soundings with the view of immediately carrying out this magnificent project. M. Favre’s report is bold and self-assured.

The tunnel will be about eighteen and a half miles in length, to which must be added about a mile and a half that will run under the shore on each side in order to give the necessary gradual ascent from the tunnel to the surface of the earth.

The distance between the top of the arch of the tunnel will never be less than 27 1-3 yards, so that all danger of the ocean breaking through will be avoided by this enormous thickness of what may be called the wall of the tunnel. This tunnel will be lined with a double arch, the first of granite and of impermeable cement, the second of thin iron plates pierce like a colander with small holes, so that the slightest leakage will be instantly discovered.

Through this tunnel it is intended that an atmospheric railroad shall be established, thereby avoiding the smoke consequent on the use of the ordinary locomotive, by which the transit from end to end will be performed in twenty-five minutes, and all the terrible sea-sickness, so awful to the continent-seeking cockney, entirely avoided.

The natural objection that arises to the practicability of this stupendous work is the difficulty of getting rid of the earth and stone, quarried out of the bowels of the subterranean chamber. In the ordinary course of engineering, every barrow-load of earth would have to be brought to one of the mouths of the tunnel, which operation would consume so much time and labor, as to add enormously to the expenses. This difficulty M. FAVRE proposes to surmount by sinking along the course of the tunnel, what he calls “Maritime Wells,” which will divide this subterranean gallery into sections of about eleven thousand yards each in length. By these wells all the encumbering earth will be thrown into the sea, forming islands about the wells themselves, and so strengthening them. These wells will serve the purpose of ventilating the tunnel. The cost of the whole is estimated in round numbers at 100,000,000f., or $20,000,000, and the cost of each yard will be 2,695f., or $539.

The soundings that have been made in the English Channel, show that the soil is very favorable to such an undertaking. At a certain depth free-stone has been found, so that the vault of the tunnel will be formed of stone impermeable to water, and capable of sustaining, in a thickness of 27 years, an enormous weight.

The estimates of the produce of this Submarine Railway are based on the supposition that 200,000 passengers now travel backwards and forwards between France and England at the present day. Of course this number would be increased by the facilities offered by the Submarine Railway. France now consumes 80,000,000 of metrical quintals of pit coal, 8,000,000 of which is furnished by England, the remainder by Belgium and Prussia, As the superior facility for transport would enable England to supply much of this coal now brought from those countries, the Company calculate that their transport of coal will amount at least to 10,000,000 tons, which will yield a profit for transport of 10,000,000 of francs yearly for this branch of commerce alone. Besides, the 3,000 ships that now annually enter the harbors of Calais, Boulogne and Dunkirk with a tonnage of 40,000 tons, will, of course, yield a great portion of their traffic to this railway, which will be safe, expeditious, and comparatively inexpensive.

These are the principal details of a scheme which, if carried out, will certainly connect the reign of Napoleon III, with one of the most stupendous scientific enterprises the world has ever seen. With a tunnel across the British Channel, and a telegraph across the Atlantic, what man will be found to say to the tide of human progress, “Thus far, but no farther, shalt thou go!”

[1 a typo in the original newspaper, which should read “Isambard.”
2 Léopold Favre, according to Terry Gourvish, The Official History of Britain and the Channel Tunnel (2006), 2.]