from Paper Manufacturing in the United States (1916) 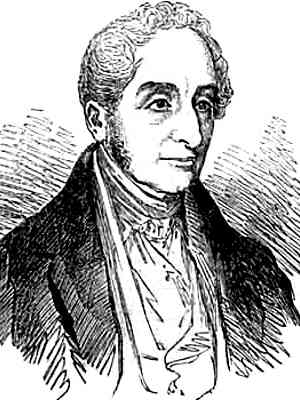 [p.172] The Fourdrinier was invented by Nicolas Louis Robert [p.173] who, while managing a large paper-mill in Essones, owned by St. Leger Didot of the famous French family of publishers, conceived the idea of making paper in a continuous sheet. After several years of experimenting he produced a machine which consisted of an endless wire band passing between two squeezing rolls, and this was the primitive beginning of what was developed into one of the most marvelous of modern machines.

Robert obtained a patent in 1799. He had been assisted by his employer, Didot, to whom the patent for the new machine was now transferred. John Gamble, a brother-in-law of Didot, became interested and, going to England, took out patents there. Didot and Gamble entered into arrangements with Henry and Sealey Fourdrinier, wholesale stationers, who financed the invention in England. With them Bryan Donkink, a practical mechanic and machinist, was associated and he made improvements on the original, a new machine being patented in 1807 by the Fourdiniers and John Gamble and first made in 1808. In principle it was the Robert machine, but already it was far in advance of that.

The Fourdrinier brothers spent over £60,000 experimenting and improving the machine and in consequence thereof were forced into bankruptcy. With them, Robert, Didot and Gamble were ruined. In 1840 a grant of £7,000 was made to the Fourdriniers and that, with the distinction of having the machine forever known by their name, was all that ever came to them for their labors and expenditures. Robert had previously received from the French government a bounty of eight thousand francs and that was the sum total of his profits from his ingenuity. Bryan Donkin was the only one of the group who profited financially. Devoting himself to the manufacture of the machine he did well and eventually was successful in establishing a large business out of it.

In point of date the Fourdrinier, in France and in England, was the first really great invention that paper-making had known. So great indeed was it that, not only did it practically revolutionize the paper-making the world over, in the course of time, but it became firmly fixed as [p.174] the one fundamental factor of the industry in its modern existence, elevating it into the front rank of mechanical pursuits.

Meanwhile, however, others had been working along somewhat similar lines toward the same end that Robert had reached. John Dickinson, of England succeeded in 1809. He invented and patented a cylinder covered with a wire cloth, the cylinder to revolve in a vat filled with pulp which, by a system of suction, was made to adhere to the cloth until the paper was formed, when it was passed on to another cylinder covered with felting. Whether the Dickinson invention was early known in the United States cannot be said; but the first American paper-making machine may have been suggested by it or may have been worked out independently.

Models in the patent office were destroyed when the building of the treasury department in Washington was burned in 1836, and specifications of very few of the patents issued prior to that date can now be found. A patent for a paper-mill was issued to Thomas Langstroth of Bucks county, Pennsylvania, in 1804, and a patent for a paper-making machine to Charles Kinsey of Essex, N.J., in 1807. It has been thought that possibly in these patents the Gilpin and Ames machines of later date may have been anticipated. Positive evidence of this, however, is lacking, and it is altogether unlikely that if such machines were brought out they did not endure long enough to leave some record, even though slight, of their performances. 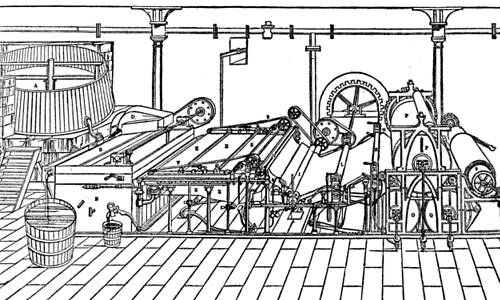 The paper machine as developed by Bryan Donkin and the Fourdriniers from the patents of Nicholas Louis Robert shown in a picture printed in 1830. (source)

At any rate it was nearly twenty years after the invention of the Fourdrinier in France and seven years after the appearance of Dickinson's machine in England before the American machine can be said to have really appeared. At that time nothing was known here about the Fourdrinier or the cylinder in any practical way. Both had been slow in adoption even in England, and as for the United States, they had not been discovered—or, at least, only theoretically.

Image added (not in orginal article) from source shown above. Excerpt from Lyman Horace Weeks Paper Manufacturing in the United States (1916), 171-174 (source).

A British patent, No. 2,951, dated 24 Jul 1806 was granted for Henry Fourdrinier's paper-making machine. The specification gave that

“A number of moulds, of the description called laid and wove, are hooked together to form one long mould. A platform to hold said moulds in such a manner that the moulds shall slide along backwards or forwards, but in no other direction. A vessel or trough from which the paper stuff or material is caused to flow upon the moulds through holes, each provided with one or more registers to limit or mark the flow of stuff. A set of cylinders, upon which is passed, in the manner of a jack towel, an endless web of felting. There is a third cylinder in contact with one of these cylinders, and this third cylinder communicates by means of another web of felt with an additional pair of pressing cylinders, whence it proceeds to the second pair, and afterwards to any fit place of reception, so that continuing the process, paper of any length may be made, and with separate moulds.”

Improvements were granted a further patent, No. 3068, dated 14 Aug 1807 issued to Henry and his brother Sealy.


Images added (not in original article) from sources shown above. Sketch of Henry Fourdrinier from Illustrated London News (7 Oct 1854), 345. As quoted in Dard Hunter, Papermaking: The History and Technique of an Ancient Craft (1943, 1978), 527. Patent numbers given in Notes on page 611. (source)