Benjamin Franklin - “Dangerous... to take shelter under a tree, during a thunder-gust” 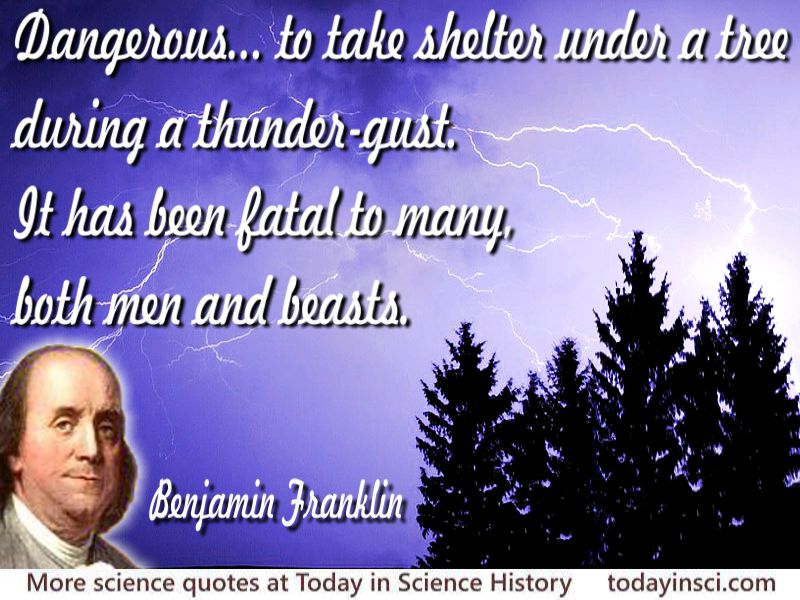 “Dangerous, therefore, to take shelter under a tree, during a thunder-gust. It has been fatal to many, both men and beasts.”
— Benjamin Franklin
Letter (29 Apr 1749) 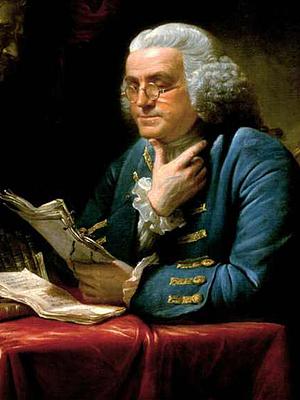 Context of Benjamin Franklin's quote “Dangerous… to take shelter under a tree, during a thunder-gust.”

In the middle of the 18th century, Benjamin Franklin was corresponding with members of the Royal Society in England, communicating his reflections on his work with electricity. A thoughtful letter listed dozens of observations and suppositions about the behaviour of lightning, which he supposed to be a form of the same phenomenon he produced on a smaller scale when experimenting with his Leyden jars. His recipient, deeming the information too good to keep for the benefit of a few readers, decided to publish a collection of his writings in book form in 1751.

Franklin's astute insight is shown in much of what he wrote. The quote above, labelled as paragraph 44 in his letter, admonishing about the danger of being alongside a tall tree in case of a lightning strike, he explained in the previous remark:

“43. As electrified clouds pass over a country, high hills and high trees, lofty towers, spires, masts of ships, chimneys, &c. as so many prominencies and points, draw the electrical-fire, and the whole cloud discharges there.”

Franklin also understood that electricity flows better through water than an insulator:

“45. It is safer to be in the open field for another reason. When the cloaths are wet, if a flash in its way to the ground should strike your head, it will run in the water over the surface of your body; whereas, if your cloaths were dry, it would go through the body.

For which reason, he gave his opinion, it might be possible to electrocute a dry rat, but not a wet one. In his previous letter, Franklin wrote about an intended pleasure party on the banks of the Skuylkil river, proposing to repeat an experiment to fire spirits (alcohol) by a spark transmitted from one bank to the other through the water. He wrote:

An electrified bumper was a glass of wine carrying a charge to shock the lips.