Thomas Fuller
“He that plants trees” 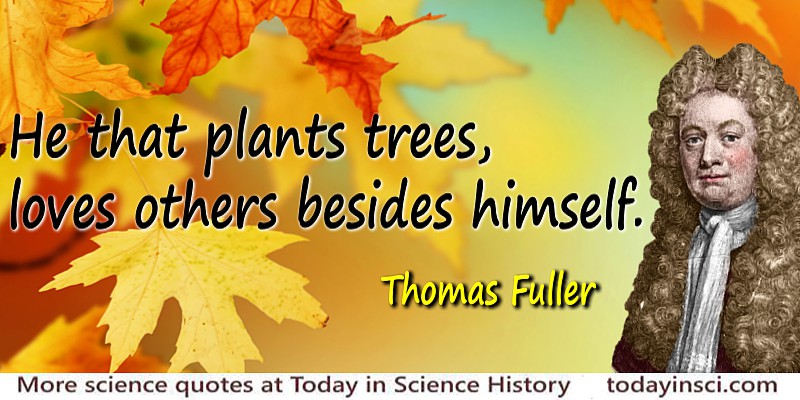 “He that plants trees, loves others besides himself.”
— Thomas Fuller
Gnomologia: Adagies and Proverbs, Wise Sentences and Witty Sayings (1732).

This quote is as written in Gnomologia (1732), a compilation of 6496 adagies and proverbs that Thomas Fuller had collected from various sources. In its introduction, Fuller wrote, “it hath been my constant Custom to note down and record whatever I thought of myself, or receiv’d from Men, or Books worth preserving.” The publication did not give any sources, or indicate any apothegms or maxims that were his original thoughts. So the quote might be original by Fuller, or not. It may be more likely be his wording of a proverb or sentiment he heard or found elsewhere.

The Gnomologia seems to be the first appearance of the quote with this particular wording and sentiment. In the centuries that followed, various compilations of proverbs have included it.

However, note that the quote is attributed to Hans Sloane in the 1884 collection Day's Collacon: an Encyclopaedia of Prose Quotations. Sloane (1660-1753), an avid botanic collector, was also a physician, and a contemporary of Fuller (1654-1734). It remains an open question whether Sloan learned the quote from Fuller's book (1732), or if Fuller heard Sloan use it. (Or, if the attribution was an editor's error.) Day’s Collacon includes several quotes with similar sentiments.

Though it appears only relatively recently in printed works so far found by Webmaster, compare this quote circulating, called a Greek proverb:

A society grows great when old men plant trees whose shade they know they shall never sit in.


Text by Webmaster with quote from No. 2248 in Gnomologia: Adagies and Proverbs, Wise Sentences and Witty Sayings (1732), 91. (source)