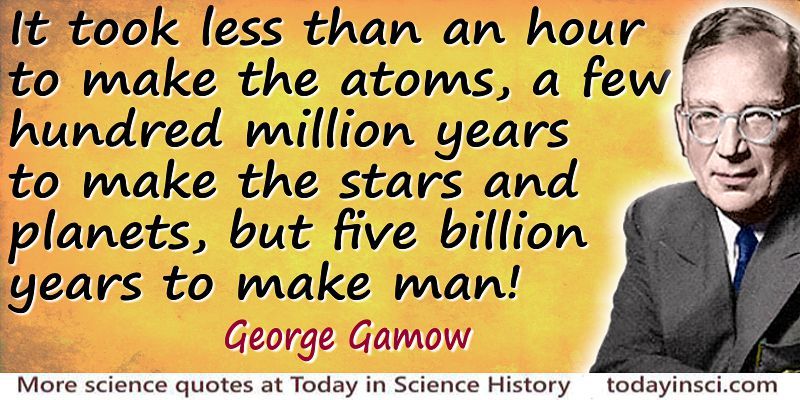 This quote comes from George Gamow’s book, The Creation of the Universe (1952), in which he was a strong advocate for the Big Bang theory of cosmogony. In the first chapter, he considered “Evolution Versus Permanence” in which he presented the evidence that the universe could not have existed for all time in a steady state. In subsequent chapters, he described the great expansion, the making of atoms, the hierarchy of condensations, and the “Private Lives of the Stars.”

In his conclusion, he contrasts the initial flurry of physical events at the origin of the universe with the eventual, and dramatic comparatively recent evolution of life as we know it:

Probably one of the most striking conclusions from our inquiry into the history of the universe is the fact that the main evolutionary events of physical development occupied only such a tiny fraction of the total period. This, of course, only means that organic evolution takes place at a much slower rate than the large-scale physical processes in the universe.

This was followed by the subject quote, written by Gamow as his final statement: