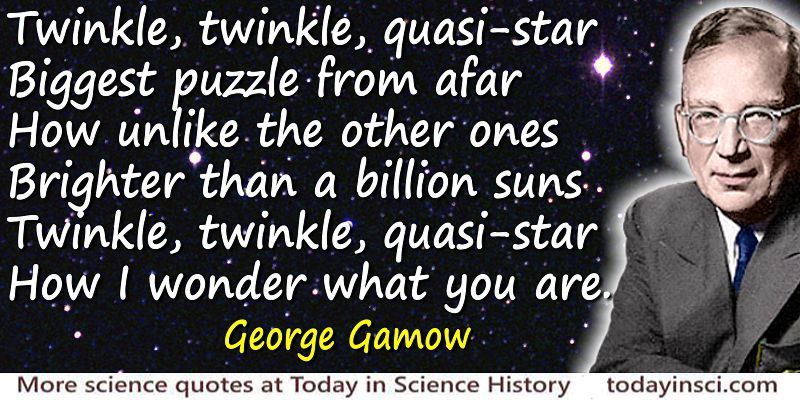 George Gamow’s parody of a nursery rhyme was quoted in passing in an article a May 1964 issue of Newsweek that gave extensive coverage over many pages to the subject of the exciting new discovery of quasars. J. Robert Oppenheimer was also quoted, for his description of quasars as

It was only in the previous year, 1963, that the first quasar (quasi-stellar object) had been identified. Maarten Schmidt, using the Hale optical telescope, had studied it as a faint star-like object with a visible jet. Its spectrum featured surprisingly unusual emission lines, which he identified as ordinary hydrogen lines shifted toward longer wavelengths (redshifted) by 16%. If that large shift is due to velocity, it is moving away at one-sixth the speed of light and one of the most distant objects visible.

Schmidt came to this realization on 5 Feb 1963, and he published his interpretation of the surprising facts about the quasi-stellar object in the journal Nature on 16 Mar 1963. He did not use the word “quasar” in the article. That name was coined in print in a May 1964 issue of Physics Today by the Chinese-American astrophysicist, Hong-Yee Chiu, who introduced the use of the contraction for convenience.

Quasars radiate as much energy per second as a hundred or more galaxies, which makes Gamow’s description as “brighter than a billion suns” quite accurate, as well as being “afar.” In fact, though, the study of quasars helped solve a puzzle, providing a final piece of evidence that undermined the Steady State theory of the universe, and supported the Big Bang theory.