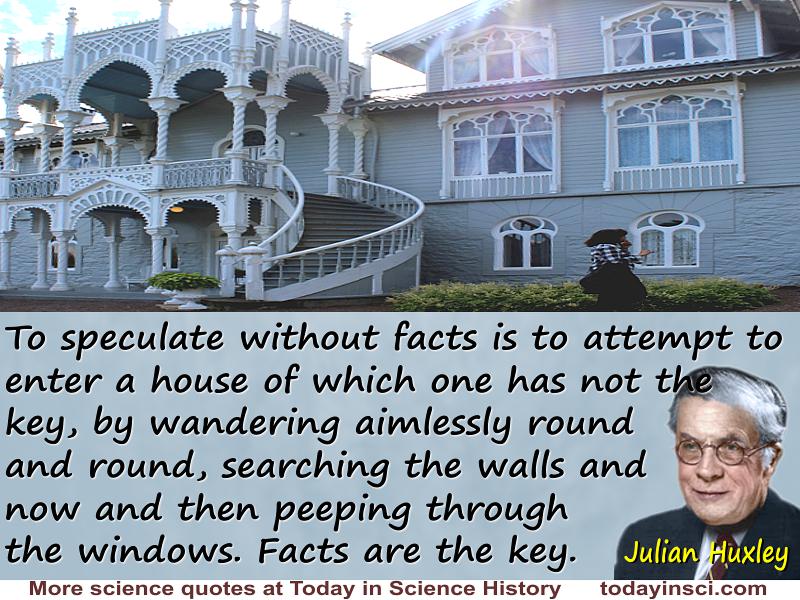 “To speculate without facts is to attempt to enter a house of which one has not the key, by wandering aimlessly round and round, searching the walls and now and then peeping through the windows. Facts are the key.”
— Julian Huxley
'Heredity', Essays in Popular Science (1926)

Context of Julian Huxley’s quote, “Facts are the key.”

This quote comes from an essay, “Heredity: 1. The Behaviour of Chromosomes” which was collected in Huxley's Essays in Popular Science1, first published in 1927. By 1929, that book appeared in a list of “One Hundred Popular Science Books”1 which was a selection chosen to be attractive to the general reader, while at the same time authoritative and modern in their treatment of the subject.

“The truth may be puzzling. It may take some work to grapple with. It may be counterintuitive. It may contradict deeply held prejudices. It may not be consonant with what we desperately want to be true. But our preferences do not determine what's true. We have a method, and that method helps us to reach not absolute truth, only asymptotic approaches to the truth—never there, just closer and closer, always finding vast new oceans of undiscovered possibilities. Cleverly designed experiments are the key.”