[Antonie van Leeuwenhoek, the first person able to observe them, gave the first detailed description of protozoa in a letter to the Secretary of the Royal Society, written from Delft, 7 Sep 1674.] 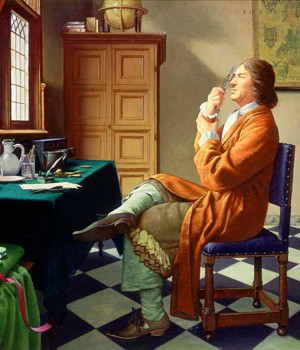 Antonie van Leeuwenhoek with his microscope.
Painted by Robert Thom (19151979)
from his series A History of Medicine in Pictures
for Parke-Davis pharmaceutical company advertisements. (source)

About two hours distant from this Town there lies an inland lake, called the Berkelse Mere, whose bottom in many places is very marshy, or boggy. Its water is in winter very clear, but at the beginning or in the middle of summer it becomes whitish, and there are then little green clouds floating through it; which, according to the saying of the country folk dwelling thereabout, is caused by the dew, which happens to fall at that time, and which they call honey-dew.

This water is abounding in fish, which is very good and savoury. Passing just lately over this lake, at a time when the wind blew pretty hard, and seeing the water as above described, I took up a little of it in a glass phial; and examining this water next day, I found floating therein divers earthy particles, and some green streaks, spirally wound serpent-wise, and orderly arranged, after the manner of the copper or tin worms, which distillers use to cool their liquors as they distil over. The whole circumference of each of these streaks was about the thickness of a hair of one’s head. Other particles had but the beginning of the foresaid streak; but all consisted of very small green globules joined together: and there were very many small green globules as well.

Among these there were, besides, very many little animalcules, whereof some were roundish, while others, a bit bigger, consisted of an oval. On these last I saw two little legs near the head, and two little fins at the hindmost end of the body. Others were somewhat longer than an oval, and these were very slow a-moving, and few in number.

These animalcules had divers colours, some being whitish and transparent; others with green and very glittering little scales; others again were green in the middle, and before and behind white; others yet w’ere ashen grey. And the motion of most of these animalcules in the water was so swift, and so various, upwards, downwards, and round about, that ’twas wonderful to see: and I judge that some of these little creatures were above a thousand times smaller than the smallest ones I have ever yet seen, upon the rind of cheese, in wheaten flour, mould, and the like.


Excerpt, from the end of a long letter (in Dutch), about the structure of the eye and of crystals. Part of this letter was translated (by an unknown person) and printed in Philosophical Transactions (23 Nov 1674), 9, No. 108, 178-182. The above translation by author Clifford Dobell closely follows the original translation published in Nov 1674. All paragraph breaks were added by Webmaster. Text from Clifford Dobell, Antony van Leeuwenhoek and his Little Animals (1932), 109-111. (source)