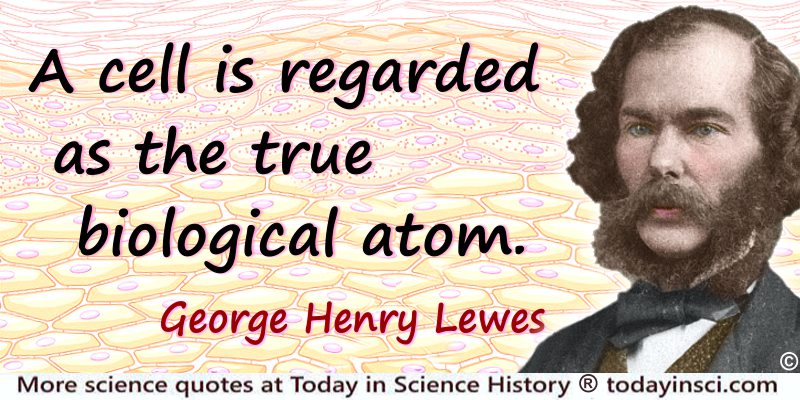 “A cell is regarded as the true biological atom.”
— George Henry Lewes
From The Physiology of Common Life (1860)

Although George Henry Lewes began his career as a critic and writer, he later turned to an interest in the natural sciences. Although he had no formal training, he wrote books effective at popularizing science to the layman.

He concluded his second volume on The Physiology of Common Life (1860), with a chapter on 'Life and Death' in which he defined life as

“Life is the dynamical condition of the Organism.”

He continued with a consideration of Cell Life, in which he made the statement that is the subject quote above:

“Biology has undergone a renovation almost as great as that which Chemistry underwent after the labours of Lavoisier. The last twenty years, indeed, will be known in history as the cell-epoch … A cell is regarded as the true biological atom. Nothing is living but cells, or what can be directly traced back to cells. However great a departure,from the cell-form may be disclosed in an anatomical investigation — as in fibres, vessels, bones, membranes — a morphological investigation detects that all these were cells in their origin. As a cell the organism commences; all through its career, a large part of the organism is made of cells, and the rest is of transformed cells, or cell-products.”