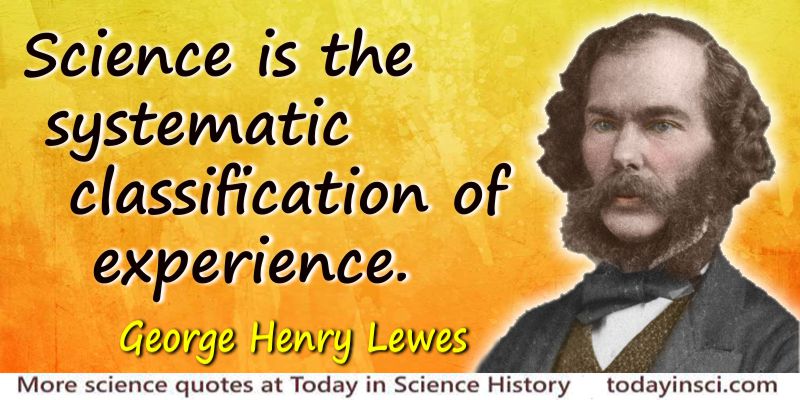 “Science is the systematic classification of experience.”
— George Henry Lewes
The Physical Basis of Mind (1877).

George Henry Lewes in his early career was a critic and writer, who later developed an interest in natural sciences, especially physiology. In his book The Physical Basis of Mind (1877) he brought together material previously published in the Fornightly Review in 1868, of which he had then been editor. In his volume he collected four essays, in which he set himself a problem to address, of which the first was on 'The Nature of Life.' He began by stating the problem relating The Mind as a problem explained as an activity of Life. He asserted that:

It is possible to read books on Natural History with intelligence and profit, and even to make good observations, without a scientific groundwork of biological instruction; and it is possible to arrive at empirical facts of hygiene and medical treatment without any physiological instruction. But in all three cases the absence of a scientific basis will render the knowledge fragmentary and incomplete; and this ought to deter every one from offering an opinion on debatable questions which pass beyond the limit of subjective observations. The psychologist who has not prepared himself by a study of the organism has no more right to be heard on the genesis of the psychical states, or of the relations between body and mind, than one of the laity has a right to be heard on a question of medical treatment.

And thus he began with his next subheading on 'The Position of Biology' with the statement shown above as the subject quote:

Science is the systematic classification of Experience.

Showing his growth towards philosophy, he then postulated three Modes of Existence: Force, Life, Mind. He distinguished between them saying the first covered “the range of general properties exhibited by all substances” with the second and third covering organized and animal substances.

Later in the work, he gave an interesting original idea, when he considered “Mr. Darwin’s hypotheses” and suggested his own “modification to the hypothesis of Natural Selection, extending it to the tissues and organs that principle of competition which Mr. Darwin has so luminously applied to organisms.”

In fact, he is now remembered by physiologists for pointing out a doctrine of the functional indifference of nerves but with different modes of action in various nerves such as the optic, auditory or others.