from Historic Ninepins: A Book of Curiosities (1869) 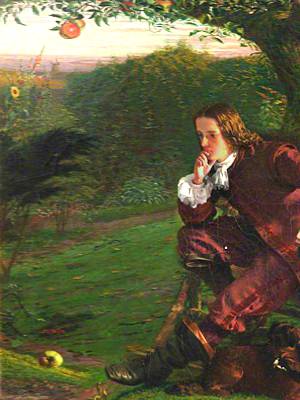 [p.315] About the life of Newton what a number of misstatements and fallacies cling to this day, notwithstanding the vigilance of his biographers. Some of these are but idle tales of wonder; others are prompted by baser motives. The tree which, by the falling of its fruit, suggested to Newton the idea of Gravity, is of paramount interest. It appears that, in the autumn of 1665, Newton left his college at Cambridge for his paternal home at Woolsthorpe. “When sitting alone in the garden,” says Sir David Brewster, “and speculating on the power of Gravity, it occurred to him, that as the same power by which the apple fell to the ground was not sensibly diminished at the greatest distance from the centre of the earth to which we can reach, neither at the summits of the loftiest spires, nor on the tops of the highest mountains, it might extend to the moon and retain her in her orbit, in the same manner as it bends into a curve a stone or a cannon-ball when projected in a straight line from the surface of the earth.” (Life of Newton, vol. i. p. 26.) Sir David Brewster notes, that neither Pemberton nor Whiston, who received from Newton himself his first ideas of gravity, records this story of the falling apple. It was mentioned, however, to Voltaire by Catherine Barton, Newton’s niece; and to Mr. Green by Sir Martin Folkes, President of the Royal Society. Sir David Brewster saw the reputed apple-tree in 1814, and brought away a portion of one of its roots.

Professor de Morgan, however, questions whether the fruit was an apple, and maintains that the anecdote rests upon very slight authority. The story of the dog Diamond, who threw down a lighted candle, which consumed some papers, the almost finished labour of some years, is given by M. Biot as a true story; and he characterizes the accident as having deprived the sciences for ever of the fruit of so much of Newton's labours. Dr. Newton* remarks, that Sir Isaac never had an communion with dogs or cats; and Sir David Brewster adds, that the view which M. Biot has taken of the idle story of the dog Diamond, charged with fire-raising among Newton’s manuscripts, and of the influence of this accident upon the mind of their author, is utterly [p.316] incomprehensible. The fiction, however, was turned to account in giving colour to M. Biot’s misrepresentation.

Whatever may have been the misstatements respecting Newton, they are exceeded in enormity by the attempt made in 1867, by M. Chasles, the French mathematician, on the authority of a series of documents purporting to be letters written by Newton and some of his most famous contemporaries; and including in particular a correspondence which is supposed to have passed between him and Pascal, the celebrated French mathematician and divine. Their effect is to show that Newton was indebted to that illustrious man, and other French philosophers, for many of the ideas on which his fame depends. It is not denied, as we understand, that Newton was the first to publish, as well as to develope, that marvellous induction which is the foundation of half our knowledge about the universe. What is asserted is that he was led to it under the inspiration of Pascal, whose mathematical genius, as is well known, was equal to his theological learning. It is this assertion which crumbles to pieces on the first touch of the facts adduced. No explanation was given by M. Chasles, of the source whence the papers were derived. They were compared with Newton’s letters in the possession of the Royal Society, at Burlington House, and their falsity was conclusive. Next, in a volume of extracts, compiled by a certain Pierre Desmaiseaux, three out of the five alleged specimens of Newton’s handwriting were verbatim copies of isolated passages occurring in the French translation of three letters originally written by Newton in English. In other words, Newton, who could not even read French without a dictionary, had been made by the fabricator to repeat in French to one correspondent, word for word, the identical expressions which he really used elsewhere in writing to another correspondent in English.

In the autumn of 1867, Sir David Brewster read to the British Association, the following observations, tending to show that this was a gigantic fraud— the greatest ever attempted in the world as connected with science and literature. ¶

“1. The correspondence was founded on the assumption that Newton was a precocious genius, having written on the infinitesimal calculus, &c., at the age of eleven, whereas he was then at school, and knew nothing of mathematics, occupying himself only with water-wheels and other boyish amusements. ¶

2. There is no evidence that Pascal and Newton had any correspondence. Having examined the whole of Newton’s papers in the possession of the Earl of Portsmouth, he never found any letter or paper in which Pascal was mentioned. ¶

3. The letters from Hannah Ayscough, Newton’s mother, bear his signature, although she was a married woman, and could have signed Hannah Smith. ¶

4. The letters of Pascal have been found by M. Fauquere to be another hand, and the signature not that of Pascal. ¶

6. An experiment with coffee is mentioned in one of the letters of Pascal, whereas coffee was at that time unknown in France. ¶

7. All Newton’s letters are in French, a language in which [p.317] he never wrote. All his letters to the celebrated French mathematician, Vangnon, are in Latin, and Newton himself has stated that he could not read French Without a dictionary. ¶

8. The style and sentiments in Newton’s letters are such as he never could have used. He expresses ‘eternal’ gratitude to Pascal, a word which no Englishman ever uses. ¶

9. According to the correspondence, M. Desmaiseaux got access to Newton’s papers after his death, and carried off a great many papers. Now, it is certain that Mr. Conduitt, Newton’s nephew, arranged and examined all Newton’s papers, in order to obtain materials for a life of him, and having failed to find a competent person to write, he undertook it himself, and obtained by persons then alive all the information that existed respecting Newton’s early life and studies. There could be no doubt, therefore, that the letters of Newton and Pascal were forgeries calculated and intended to transfer to Pascal the glory of the discovery of the law of gravitation which was due to Newton.” ¶

One hundred and thirty years had elapsed since the death of the great Newton, when (in 1858) the men of Lincolnshire raised in Grantham, the birthplace of their illustrious townsman, a statue to his memory. We grow impatient to place the effigies of a great soldier upon some lofty column, or of a showy political leader upon some ornate pedestal; but we suffer generation after generation to pass away ere we mark the place which gave birth to our most profound interpreter of the book of nature. “Happy,” says an eloquent contemporary, “not only in his surpassing genius, but in the time of his birth, he conquered a universe where others may be justly proud to win a province. For all time he must in some sense remain thus alone. An equal or even a brighter genius, should such arise in the course of time, can never cast his greatness into shade; for never again can so sublime a problem be presented to the intellect of man as the great secret of the material universe which Newton was born to solve.” Frankly as the pre-eminence of the English discoverer was admitted by men like La Grange, who followed in his track, there is a tinge of noble envy in the saying which Lord Brougham quotes from the French philosopher. “ Newton,” said La Grange, “was not only the greatest but the most fortunate genius that ever existed; because there can only once be found a system of the universe to be established.” His good fortune, indeed, secures him from all future rivalry to the end of time, as amply as his matchless insight gave him the supremacy over all the explorers of nature who had lived before him.

Halley writes of Newton’s Principia: “It may be justly said that so many and so valuable philosophical truths as are herein discovered and put past dispute, were never yet owing to the capacity and industry of any one man.” “The importance and generality of the discoveries,” says Laplace, “and the immense number of original and profound views, which have been the germ of the most brilliant theories of the philosophers of this (18th) century, and all presented with much elegance, will insure to the work on the Mathematical Principles of Natural Philosophy a pre-eminence above all the other productions of human genius.”

[* Dr. Humphrey Newton of Grantham, who was Isaac Newton’s assistant and amanuensis. —Webmaster]