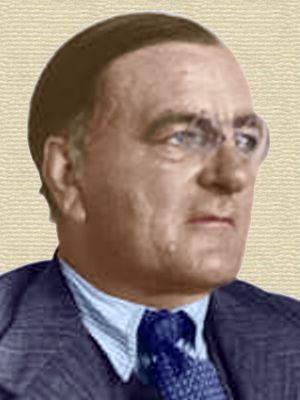 Paul Niggli was a Swiss mineralogist who originated the idea of a systematic deduction of the patterns in the internal structure of crystals by means of X-ray data. He supplied a complete outline of methods that have since been used to determine these patterns. There are 230 possible different internal patterns for different crystals. Because the patterns describe a three-dimensional arrangement, they are known as space groups. Niggli also developed a notation that described the individual space groups, and co-authored a definitive set of tables describing them.

Niggli was the third scientist to lead research at the Institut für Mineralogie und Petrographie in Zurich, Switzerland in 1920. It was there that in 1856 crystallographic research first began in Zürich with A. Kenngott, who described the crystals of alpine minerals with the classical methods of morphological crystallography. Those efforts were followed by U. Grubenmann, whoc concentrated on the field of petrography.

Meanwhile, Niggli published the seminal reference work in structural crystallography, Geometrische Kristallographie des Diskontinuums, and established the Institute as a leader in the field.

In 1929, after a Faraday Society meeting in London on Crystal Structure and Chemical Constitution, Sir William Bragg convened a meeting to improve the communication between international crystallographers. Afterwards, committees were set up to investigate a coordinated abstracting scheme, the preparation of standardized space-group tables and the standardization of crystallographic nomenclature.

Crystallography and its importance in the other sciences. (source)

The next year, Paul Niggli hosted a 12 day Tables Committee meeting at the Institute. This led to the publication, in 1935, of the International Tables for the Determination of Crystal Structures to which Niggli contributed, and was a co-author. Thus the nomenclature of the 230 space-groups was standardized with the use of such notation as I 213 replacing the less informative symbol T 5.

Meanwhile, Niggli's research also advanced in crystal chemistry and the application of group representation theory to crystal physics. He divided his scientific and teaching activities between petrography, mineralogy and crystallography, and was exceptionally active in each with equal three main fields.

The Roebling Medal was awarded to Niggli in 1947. It is the highest award of the Mineralogical Society of America for scientific eminence as represented primarily by scientific publication of outstanding original research in mineralogy.

Niggli retired in 1959, turning over leadership to F. Laves, when the institute was reorganized as the Institut für Kristallographie und Petrographie.