A FORERUNNER OF COPERNICUS. 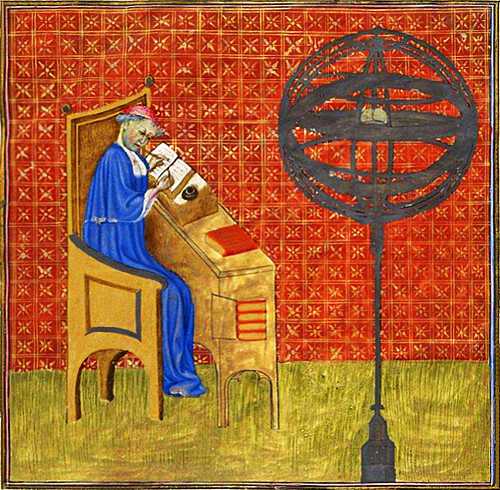 Miniature illustration of Nicole Oresme in his study, with an armillary sphere. in the foreground. (source)

IN the year 1368 Albert von Helmstaedt, better known by the name of Albert de Saxe, a celebrated master of the Faculty of Arts of the University of Paris, wrote a commentary on Aristotle’s Treatise on the Heavens and the Earth. One of the questions propounded in this treatise is “whether the earth, placed in the center of the universe, is continually at rest or continually in motion.” In regard to this question Albert asserts that “one of my masters appears to profess” that it is impossible to demonstrate that the movement of the earth and the immobility of the heavens are incompatible with the observed phenomena. Albert then proceeds, with all respect to his master, to demonstrate this incompatibility by the orthodox methods of the schoolmen. The interesting point in all this is the evidence furnished of the existence, in the middle of the fourteenth century, of a professor of the University of Paris who regarded the rotation of the earth even as a possibility.

Although this unnamed and unknown master did not convince Albert de Saxe, he appears to have had better success with another student who attended lectures at the university about the same time. This student was Nicole Oresme, of Bayeux, who came to Paris in 1348, to study theology, and in 1356 became grand master of the College of Navarre. In 1362, after having obtained the degree of master in theology he was appointed a canon of Rouen, and two years later he was promoted to the rank of dean of the chapter. He was created bishop of Lisieux in 1377 and died in that city in 1382.

Oresme was endowed with remarkable mental activity, and wrote a great number of works, some in Latin and others in French, in a style that made him one of the acknowledged masters of that language in the fourteenth century. His treatise on money and coinage, written both in Latin and in French, exhibits him as a pioneer in the science of political economy, and Curtze has shown that Oresme, in a brief mathematical tract, forestalled Descartes and Ferneat in the invention of geometrical coordinates. 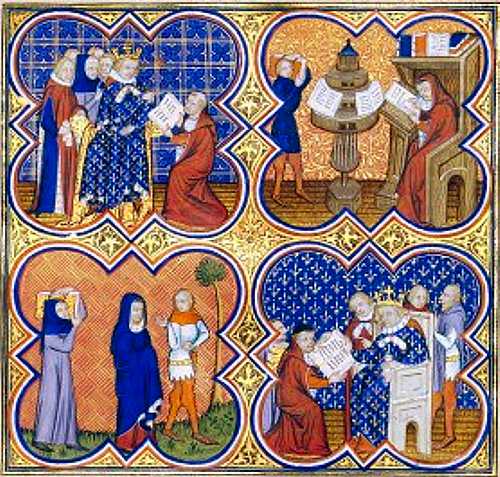 The reigning king of France, Charles V, was desirous of disseminating among his subjects the knowledge that had been restricted to scholars acquainted with Latin. In pursuance of this design the king appealed to the dean of Rouen, to whom he had already given many tokens of his confidence and esteem.

Oresme had already written in French a “Treatise on the Sphere, designed to teach the form and arrangement of the world, the number and order of the elements and the movements of the heavenly bodies, to every man of free condition and noble mind.” The king now commissioned him to write French translations and commentaries on some of Aristotle’s works. In 1370-1 Oresme translated Aristotle’s Ethics, Politics and Economics. These translations and commentaries were printed in the 16th century. Oresme also wrote a translation, with extensive commentaries, of Aristotle’s Treatise on the Heavens and the Earth. This work has never been printed, but several manuscript copies are in existence. One, in the possession of the Bibliotheque Nationale, is adorned with miniatures and bears the signature of the Due de Berry, brother of Charles V.

In the second book of the Treatise on the Heavens and the Earth Aristotle proves, to his own satisfaction, that the earth remains motionless in the center of the universe. After translating this section Oresme proceeds to give his own opinion, “subject to correction,” that the earth revolves daily on its axis and that the heavens are motionless. He develops this opinion at great length and clearly and ingeniously shows the fallacy of the arguments urged against it—for example, that the rotation of the earth would not account for the rising and setting of the sun, moon, and stars, that it would necessarily produce a mighty east wind (the air being assumed to be left behind), and that a stone thrown vertically upward would strike the ground to the west of its point of departure. Oresme takes the example of a ship moving very steadily eastward and shows that, to an observer on board that ship, a motionless vessel would appear to be moving westward, and that it would be impossible for such an observer to decide which of the two vessels was moving. He explains that the atmosphere moves with the earth as air confined in a closed vessel moves with the vessel, and that a stone thrown vertically upward also moves with the earth, both in ascending and in descending, so that it necessarily returns to the point from which it was thrown. Hence he concludes that it is impossible to prove by experiment that the heavens move and the earth remains at rest.

After having thus shown the futility and fallacy of the appeal to experience, Oresme proceeds to refute the religious, metaphysical, and astronomical arguments in favor of the immobility of the earth. Here it becomes uninteresting and tedious to follow him. The same remark applies to his support of his own opinion by positive arguments, of which some are sound and ingenious and others metaphysical an’d absurd. One argument is rather amusing. Oresme says that if one thing receives benefit from another it should obtain this benefit by its own movement. Hence the earth, in order to receive the heat and light. of the sun in all its parts, must rotate on its axis, instead of requiring the sun to revolve around it. Thus the roasting joint turns on the spit before the fire, but the fire does not move around the spit.

Did Copernicus possess any knowledge of this dissertation in favor of the daily rotation of the earth? It appears impossible to give a decisive answer to this question. Master Nicole Oresme’s commentary on Aristotle’s work, written in French, at the king’s command and cost, by one of the most important members of the University of Paris, should have had a great vogue in France, but the fact that it was written in French probably prevented its becoming widely known among foreign scholars. It is a very remarkable fact that this one work has never been printed, although the Treatise on the Sphere, which was often appended to it in the manuscripts, in accordance with the author’s expressed desire, was printed in the sixteenth century. Hence it is very possible that Copernicus was ignorant of the existence of Oresme’s work.

On the other hand, the arguments advanced by Copernicus, in his treatise De Revolutionibus Orbium Coelestium in support of the possibility and probability of the daily rotation of the earth, so strongly resemble Oresme’s reasoning, that this part of the great work of Copernicus might well be taken for a concise and somewhat obscure résumé of the corresponding portion of Oresme’s commentary on Aristotle’s Treatise on the Heavens and the Earth.

At all events, it is certain that the work of Nicholas Copernicus was anticipated, even if it was not inspired, by that of Nicholas Oresme.

[Explanation of second image: King Charles V entrusted the translation of Aristotle’s works to his secretary and intimate counselor, the great scholar Nicolas Oresme. The illumination appears in the Prologue to the translation of Aristotle’s Politics and Economics. The four panels illustrate four steps in the translation process. First, Charles V, surrounded by dignitaries, orders his advisor to translate the book. The canon then drafts the French version: two volumes of the original are on a book wheel, a secretary brings a third. Sitting in a cathedra which serves him at the same time as a library, Oresme holds in his right hand a trimmed reed (calame) for writing and in the left a little penknife (a canivet) to scratch the errors. Once his work is over, he returns to the King, accompanied by a bailiff and a clerk carrying the translation on his shoulder. In the last scene Oresme presents his work to the sovereign surrounded by courtiers.]