ON THE MODE OF COMMUNICATION OF CHOLERA.

from The Edinburgh Medical Journal (1856)

To the Editor of the Edinburgh Medical Journal. 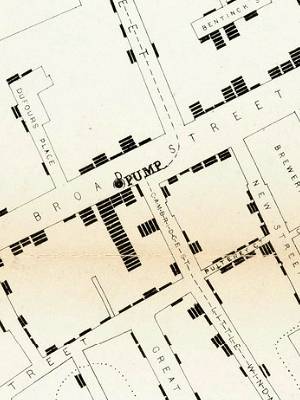 Detail from a map in John Snows report on the cholera outbreak in London during autumn 1854. Marking deaths at each address, a particular water pump is seen to be central.
Credit: Wellcome Collection (source)

[p.668] Sir,—Dr Alison has called attention in the last number of the Journal to the opinions and facts of Dr Budd of Bristol, respecting the communication of cholera by dejections, and I shall be obliged if you will allow me to make a. few additional remarks on the subject, partly on my own account, but chiefly to lay the matter before the reader in what I conceive to be its true aspect. I arrived at [p.669] the conclusion in the latter part of 1848, that cholera is communicated by the evacuations from the alimentary canal, and in August, 1849, I endeavoured to establish this point by a number of facts, which I published in a pamphlet, “On the Mode of Communication of Cholera.” In the following month, Dr William Budd published a pamphlet “On Malignant Cholera” in which be expressed views similar to my own, and made a full and handsome acknowledgment of my priority in more than one place in his essay. I feel sure that Dr Alison was not aware of these circumstances, or he would have mentioned my name in connection with his subject.

In his recent papers in the Association Journal, Dr William Budd attributes a much greater range to the action of the cholera poison through the air, than I am willing to admit, and if he can establish this point, the credit of it will be due to him. In my opinion, the cholera poison only produces its effects through the air when carried by insects, or when the evacuations become dry, and are wafted as a fine dust. I have on several occasions, since the autumn of 1849, alluded to the great mortality from cholera amongst the mining population of this country, as an instance in which the morbid matter of the disease is swallowed with the food. As the miners stay in the pits eight or ten hours at a time, they always take food down with them, which they invariably eat with unwashed hands, and without knife and fork. There are no privies in the pits, and Dr Budd himself alludes to the foul state of the latter. When a case of cholera or choleraic diarrhœa occurs in a pit, it must therefore almost of necessity happen that the hands of many of the workmen would be soiled by the evacuations, minute quantities of which would be swallowed with the food. Dr Budd has alluded to the food of the pitmen being supplied from very different sources, and prepared by different bands; but the hand by which the food is contaminated is as often that from which it is eaten, as that by which it is prepared. This mode of taking minute quantities of poison was pointed out by Dr Christison long ago as being the way in which house painters of uncleanly habits, sometimes acquire lead colic.

In the very interesting cases which Dr Budd has related of propagation of cholera in the ill kept privies of a large workhouse, the same mode of communication of the disease could not fail to exist. The seats would be soiled by the cholera discharges, and the paupers who came afterwards would have neither the desire nor the opportunity to wash their hands after each visit to the place. …

The mode of communication of the disease which I am advocating also, explains many circumstances in the history of cholera, which could not be explained by effluvia from the evacuations. I allude to the spreading of cholera in the crowded habitations of the poor, who cook, eat, and nurse the sick in the same room, and pay little attention to cleanliness, and to its not spreading in the houses of the well-to-do; also to the escape of the medical and clerical visitors, who do not eat or drink in the room of a poor cholera patient, and who carefully wash the hands when required, whilst the social visitor who comes to see the patient, or to attend his funeral, often suffers. …

Dr Budd entirely agrees with me that the cholera poison is produced only in the alimentary canal, and acts only on that canal, which it reaches by being swallowed. He enforces this point by the same arguments that I had used, adding indeed some additional illustrations; so that in fact there is no difference between us respecting the essential mode of communication of the disease, but only as to the extent to which it is communicated through the air. …

I would gladly say much more on the pathology of cholera as hearing on the mode of its communication, but I am afraid of making this letter too long. I will only say in conclusion that, should the views I first promulgated be exactly correct, the extension of cholera may be more easily prevented than it would be if the slight modification of these views introduced by Dr Budd were true. In [p.670] the former case all that would be required to prevent the disease would be such a close attention to cleanliness in cooking and eating, and to drainage and water supply, as is desirable at all times.—I am, Sir, your obedient servant,

[We regret that from want of space, we have been compelled to abbreviate Dr Snow’s letter. The important points, however, have been retained. His theory that it is chiefly or almost exclusively by swallowing that the poison of cholera is taken in, can scarcely be supposed, notwithstanding his arguments, to be the usual mode of admission of the poison in the numerous cases which he, as well as Dr Budd, seems to suppose to have extended by the people using the same privies. Dr Alison, in former papers, in which he maintained the contagious property of cholera, has, however, expressly said that he gave no opinion as to the mode or modes in which the poison, thrown off by the human body, may be taken into another—only as to the question whether, in one way or another, it may be so thrown off and may be so taken in, and the epidemic extension be thus affected; and, therefore, if as Dr Alison believes, there are different modes of extension, multiplication and absorption of the poison, demanding a certain multiplicity and variety of practical precautions—this will be all in favour of the only practical opinion Dr Alison has given on the subject.]