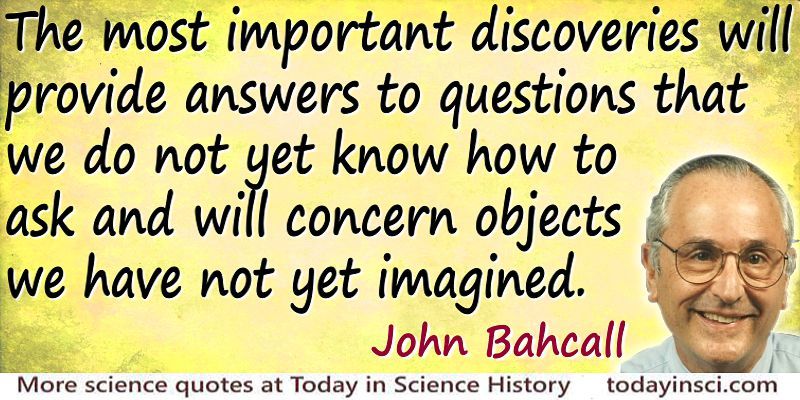 “The most important discoveries will provide answers to questions that we do not yet know how to ask and will concern objects we have not yet imagined.”
— John N. Bahcall
At Congressional committee hearing on Hubble Space Telescope (1990).

On 13 Jul 1990, John Bahcall presented a statement to the Subcommittee on Space Science and Applications of the U.S. House of Representatives, Washington, D.C. His subject was “Science with the Hubble Space Telescope.” The Hubble Space Telescope (HST) had just been launched, and to everyone’s dismay, a serious flaw in the mirror design was preventing it from taking clear images. He addressed the committee as President of the American Astronomical Society, and as a member of the scientific working group of the HST since its inception in 1973. He gave his assurance that the problems could be repaired, and he enumerated the great advantages the HST would still give over ground-based telescopes. After he had given examples of known questions to be investigated, he broadened the exciting opportunities the HST should yield, saying:

“As marvelous and as difficult an achievement as the fulfillment of this promise will be, I personally will be disappointed if this is all that HST does. I believe that the most important discoveries will provide answers to questions that we do not yet know how to ask and will concern objects that we can not yet imagine.

In my personal view, a failure to discover unimagined objects and answer unasked questions, once HST functions properly, would indicate a lack of imagination in stocking the Universe on the part of the Deity.”