John N. Bahcall
“We're about to learn something important” 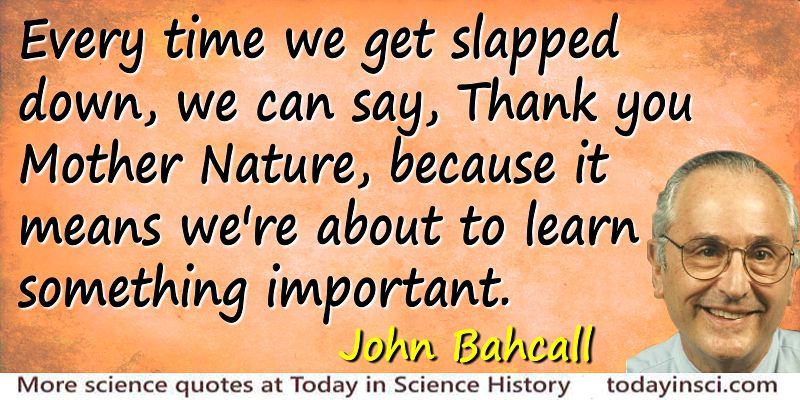 “Every time we get slapped down, we can say, ‘Thank you Mother Nature,’ because it means we're about to learn something important.”
— John N. Bahcall
As quoted in Time (6 Mar 1995)

In their March 1990 cover story eight-page article, “Unraveling Universe” in Time magazine, Michael D. Lemonick and J. Madeleine Nash presented then recent work by several scientists which did not appear to fit into previous beliefs about how the cosmos works, its age, and the dark-matter problem.

In wrapping up their description of the conflicts, the authors asked, “Will a crucial new observation tie up the loose ends in cosmology? Or do theorists need a fundamentally new framework for understanding the universe?” and provided an answer from Princeton astrophysicist David Spergel that it’s a lot easier to add bells and whistles like cosmic strings or a cosmological constant to existing theories than to come up with something as powerful as relativity.

The authors concluded on an optimistic note that, “As they search for answers, the noisy clash of egos and the confusion of conflicting claims may be taken as signs that science is alive and well and likely on the cusp of a major new insight.” They summed it up with the quote from John Bahcall of the Institute for Advanced Study in Princeton:

“Every time we get slapped down, we can say, ‘Thank you Mother Nature,’ because it means we’re about to learn something important.”