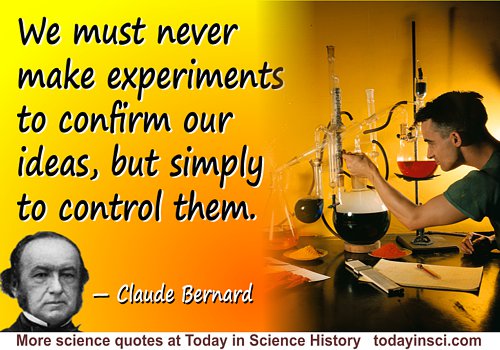 “We must never make experiments to confirm our ideas, but simply to control them.”
— Claude Bernard
From An Introduction to the Study of Experimental Medicine (1865, trans. 1957).

In the translation, we can read a more complete quote:

“Men who have excessive faith in their theories or ideas are not only ill prepared for making discoveries; they also make very poor observations.

Of necessity, they observe with a preconceived idea, and when they devise an experiment, they can see, in its results, only a confirmation of their theory. In this way they distort observation and often neglect very important facts because they do not further their aim. This is what made us say elsewhere that

we must never make experiments to confirm our ideas, but simply to control them; which means, in other terms, that one must accept the results of experiments as they come, with all their unexpectedness and irregularity.”

Bernard continues: “But it happens further quite naturally that men who believe too firmly in their theories, do not believe enough in the theories of others.

So the dominant idea of these despisers of their fellows is to find others’ theories faulty and to try to contradict them. The difficulty, for science, is still the same. They make experiments only to destroy a theory, instead of to seek the truth. At the same time, they make poor observations, because they choose among the results of their experiments only what suits their object, neglecting whatever is unrelated to it, and carefully setting aside everything which might tend toward the idea they wish to combat. By these two opposite roads, men are thus led to the same result, that is, to falsify science and the facts.”

Sadly, these words written by Bernard 150 years ago still ring so true in our time. For example, consider how climate change deniers of today selectively cherry-pick data to support their preconceived intended outcome. Read Bernard’s words above with this modern example in mind, and you may better understand how he was writing about the struggles he knew for valid theories based carefully on facts to prevail against the deniers of his own time.