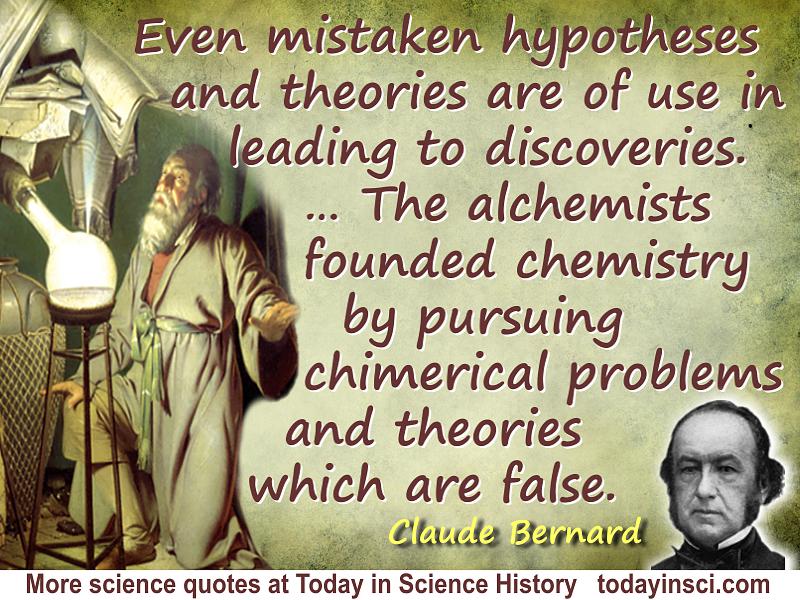 “Even mistaken hypotheses and theories are of use in leading to discoveries. … The alchemists founded chemistry by pursuing chimerical problems and theories which are false. ”
— Claude Bernard
In An Introduction to the Study of Experimental Medicine

“Even mistaken hypotheses and theories are of use in leading to discoveries. This remark is true in all the sciences. The alchemists founded chemistry by pursuing chimerical problems and theories which are false. In physical science, which is more advanced than biology, we might still cite men of science who make great discoveries by relying on false theories. It seems, indeed, a necessary weakness of our mind to be able to reach truth only across a multitude of errors and obstacles.”

Bernard then admonishes that physiologists

“should conclude that in the present state of biological science accepted ideas and theories embody only limited and risky truths which are destined to perish. They should consequently have very little confidence in the ultimate value of theories, but should still make use of them as intellectual tools necessary to the evolution of science and suitable for the discovery of new facts.”

He also asserted that experimentation must be rigorously designed and criticized to produce unquestionable observations, thus getting rid of the errors of fact which are the sources of error in theory.