Claude Bernard - Context of quote
“The experimenter who does not know…” 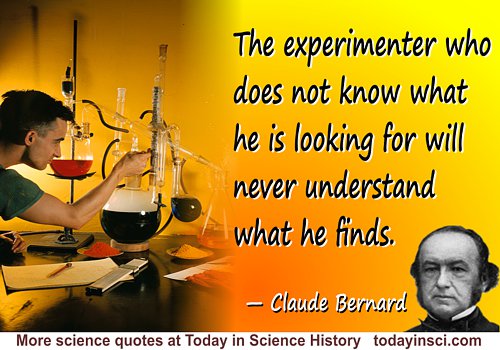 “The experimenter who does not know what he is looking for will never understand what he finds.”
— Claude Bernard
Attributed.

This quote is one of those tantalizingly known only as “attributed.” Any original quote by Bernard would presumably be in his native French language, which makes tracking the source down more difficult. It is also seen1 as:

He who does not know what he is looking for will not lay hold of what he has found when he gets it.

The pitfall of the experimenter consists in believing that which he does not know, and taking as absolute truths those truths which are only relative.

If you know the primary source of the attributed quote, please contact the Webmaster.


Text by Webmaster. The subject quote appears, for example, in John Farley, The Spontaneous Generation Controversy from Descartes to Oparin (1977), 3, but without citation. (source)