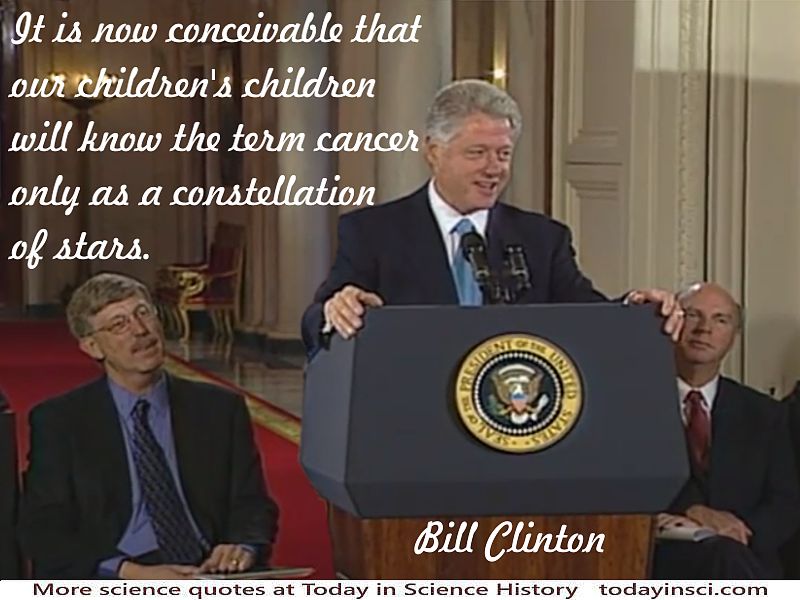 “It is now conceivable that our children's children will know the term cancer only as a constellation of stars.”
— U.S. President Bill Clinton
(26 Jun 2000)

The Context of Bill Clinton's “Cancer only as a Constellation” Quote

“With this profound new knowledge, humankind is on the verge of gaining immense, new power to heal. Genome science will have a real impact on all our lives—and even more, on the lives of our children. It will revolutionize the diagnosis, prevention and treatment of most, if not all, human diseases.

In coming years, doctors increasingly will be able to cure diseases like Alzheimer's, Parkinson's, diabetes and cancer by attacking their genetic roots. Just to offer one example, patients with some forms of leukemia and breast cancer already are being treated in clinical trials with sophisticated new drugs that precisely target the faulty genes and cancer cells, with little or no risk to healthy cells. In fact, it is now conceivable that our children's children will know the term cancer only as a constellation of stars.

But today's historic achievement is only a starting point. There is much hard work yet to be done. That is why I'm so pleased to announce that from this moment forward, the robust and healthy competition that has led us to this day and that always is essential to the progress of science, will be coupled with enhanced public-private cooperation.

Public and private research teams are committed to publishing their genomic data simultaneously later this year, for the benefit of researchers in every corner of the globe. And after publication, both sets of teams will join together for an historic sequence analysis conference. Together, they will examine what scientific insights have been gleaned from both efforts, and how we can most judiciously proceed toward the next majestic horizons.

What are those next horizons? Well, first, we will complete a virtually error-free final draft of the human genome before the 50th anniversary of the discovery of the double helix, less than three years from now. Second, through sustained and vigorous support for public and private research, we must sort through this trove of genomic data to identify every human gene. We must discover the function of these genes and their protein products, and then we must rapidly convert that knowledge into treatments that can lengthen and enrich lives.

I want to emphasize that biotechnology companies are absolutely essential in this endeavor. For it is they who will bring to the market the life-enhancing applications of the information from the human genome. And for that reason, this administration is committed to helping them to make the kind of long-term investments that will change the face of medicine forever.

From White House annouoncement broadcast on the day of the publication of the first draft of the human genome. Text of Remarks on the Completion of the First Survey of the Entire Human Genome Project (26 Jun 2000). (source)