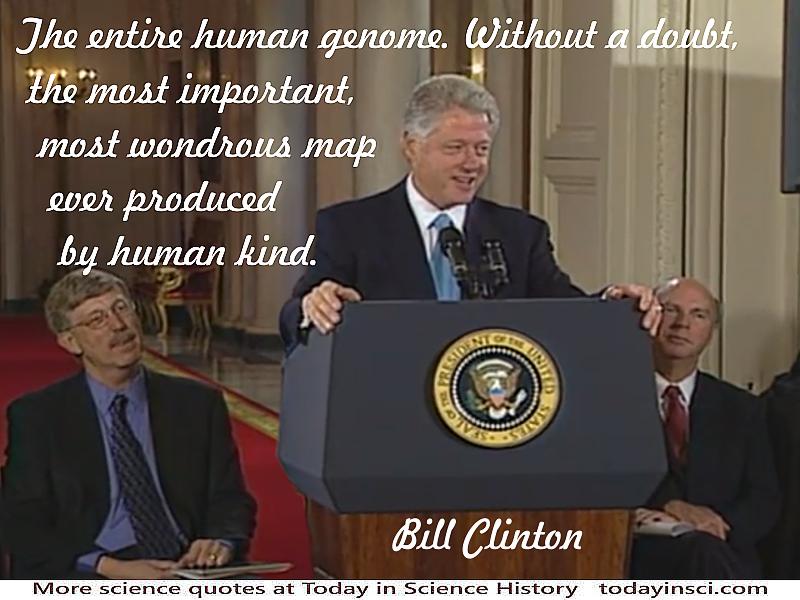 “We are here to celebrate the completion of the first survey of the entire human genome. Without a doubt, this is the most important, most wondrous map ever produced by human kind.”
— U.S. President Bill Clinton
(26 Jun 2000)

On 26 Jun 2000, the first draft was announced of the human genome, the result of an international research effort to map the entire sequence of genes in human DNA. Beginning as early as 1984, it had been the focus of numerous universities and laboratories in the U.S., together with others in Great Britain, France, Germany, Japan and China. Upon publication of the majority of the genome in Feb 2001 in the journal Nature, Dr. Francis Collins, director of the National Human Genome Research Institute, described the genome in terms of a book with three volumes:

“It's a history book - a narrative of the journey of our species through time. It's a shop manual, with an incredibly detailed blueprint for building every human cell. And it's a transformative textbook of medicine, with insights that will give health care providers immense new powers to treat, prevent and cure disease.”

For the announcement, in the East Room of the White House on 26 Jun 2000, President Bill Clinton was joined by British Prime Minister Tony Blair (via satellite), Dr. Francis Collins and Craig Ventner, President of Celera Genomics Corporation. Ambassadors from the United Kingdom, Japan, France and Germany were present in the audience, together with James Watson and scientists involved in the Human Genome Project.

After welcoming everyone, the President began:

“Nearly two centuries ago, in this room, on this floor, Thomas Jefferson and a trusted aide spread out a magnificent map—a map Jefferson had long prayed he would get to see in his lifetime. The aide was Meriwether Lewis and the map was the product of his courageous expedition across the American frontier, all the way to the Pacific. It was a map that defined the contours and forever expanded the frontiers of our continent and our imagination.

Today, the world is joining us here in the East Room to behold a map of even greater significance. We are here to celebrate the completion of the first survey of the entire human genome. Without a doubt, this is the most important, most wondrous map ever produced by humankind. …

It was not even 50 years ago that a young Englishman named Crick and a brash even younger American named Watson, first discovered the elegant structure of our genetic code. … [That announcement] in the journal Nature was one of the great understatements of all time:

‘This structure has novel features, which are of considerable biological interest.’

…Today's announcement represents more than just an epic-making triumph of science and reason. After all, when Galileo discovered he could use the tools of mathematics and mechanics to understand the motion of celestial bodies, he felt, in the words of one eminent researcher,

‘that he had learned the language in which God created the universe.’

Today, we are learning the language in which God created life. We are gaining ever more awe for the complexity, the beauty, the wonder of God's most divine and sacred gift. With this profound new knowledge, humankind is on the verge of gaining immense, new power to heal. Genome science will have a real impact on all our lives -- and even more, on the lives of our children. It will revolutionize the diagnosis, prevention and treatment of most, if not all, human diseases.

In coming years, doctors increasingly will be able to cure diseases like Alzheimer's, Parkinson's, diabetes and cancer by attacking their genetic roots. Just to offer one example, patients with some forms of leukemia and breast cancer already are being treated in clinical trials with sophisticated new drugs that precisely target the faulty genes and cancer cells, with little or no risk to healthy cells. In fact,

it is now conceivable that our children's children will know the term cancer only as a constellation of stars. …”

The President continued to thank scientists and the public-private cooperation, and spoke about the future horizons for continued research and applications. He introduced Prime Minister Blair's comments, and those from Francis Collins and Craig Ventner. Dr. Collins said, in part:

“What more powerful form of study of mankind could there be than to read our own instruction book?”