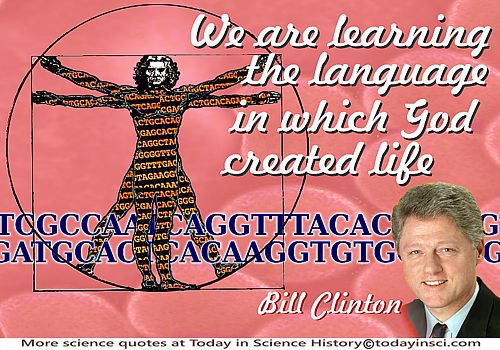 The Context of Bill Clinton's “The language in which God created life.” Quote

“we have pooled the combined wisdom of biology, chemistry, physics, engineering, mathematics and computer science; tapped the great strengths and insights of the public and private sectors. More than 1,000 researchers across six nations have revealed nearly all 3 billion letters of our miraculous genetic code. I congratulate all of you on this stunning and humbling achievement.

Today's announcement represents more than just an epic-making triumph of science and reason. After all, when Galileo discovered he could use the tools of mathematics and mechanics to understand the motion of celestial bodies, he felt, in the words of one eminent researcher,

'that he had learned the language in which God created the universe.'

Today, we are learning the language in which God created life. We are gaining ever more awe for the complexity, the beauty, the wonder of God's most divine and sacred gift. With this profound new knowledge, humankind is on the verge of gaining immense, new power to heal. Genome science will have a real impact on all our lives—and even more, on the lives of our children. It will revolutionize the diagnosis, prevention and treatment of most, if not all, human diseases.

… modern science has confirmed what we first learned from ancient fates. The most important fact of life on this Earth is our common humanity. My greatest wish on this day for the ages is that this incandescent truth will always guide our actions as we continue to march forth in this, the greatest age of discovery ever known.”