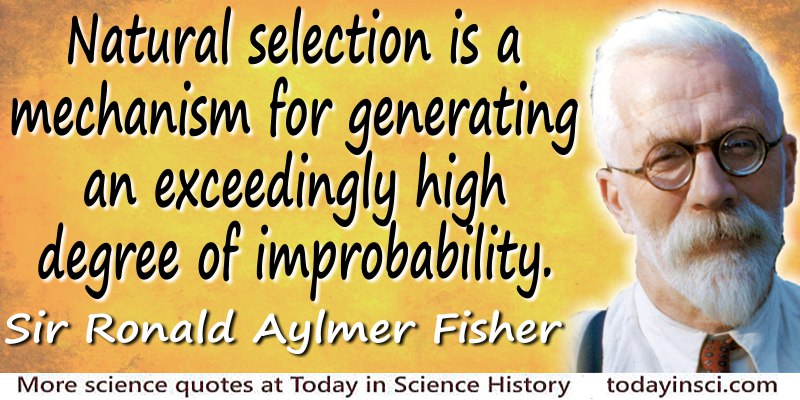 “Natural selection is a mechanism for generating an exceedingly high degree of improbability.”
— Ronald Aylmer Fisher
From Natural Selection, Heredity, and Eugenics (1983).

Although this is well-known, and seen as a quote which various sources ascribe to Ronald Fisher, these words were actually written by Julian Huxley, to summarize Fisher's idea made in longer quote. Both forms appear in the book Evolution as a Process (1954) which Huxley co-edited. The shorter version was provided by Huxley early in the book to introduce Huxley's concept. It appears in full, later in the book, in the essay by Fisher, “Retrospect of the Criticisms of the Theory of Natural Selection.” The shorter quote is clearly not verbatim, but in Huxley’s words, when compared with the statement as it was actually written by Fisher:

“It was Darwin’s chief contribution, not only to Biology but to the whole of natural science, to have brought to light a process by which contingencies a priori improbable are given, in the process of time, an increasing probability, until it is their non-occurrence, rather than their occurrence, which becomes highly improbable.”

The essay itself is written to look back at what Fisher identifies as historically four successive “comparatively distinct periods” when “objections and difficulties in respect of Darwin’s views” were aired. Fisher considers these periods to be:

(a) “the difficulties which he himself felt during the period the theory was developing in his mind”, (b) objections from scientific friends discussed “as difficulties of the theory in the sixth chapter of the Origin”, (c) the reactions expressed in the essays of “the more conservative or recalcitrant biologists … to the growing acceptance of Darwin’s views” and (d) when the early geneticists widely disseminated the assumption “that the discovery of Mendel’s laws of inheritance was unfavorable, or even fatal, to the theory of natural selection.”

Midway through his essay, Fisher addresses one of these difficulties “with respect to organs of extreme perfection, of which Darwin chooses the eye as an example.” Darwin recognized that this only became a difficulty to understand if imagination is too limited. Quoting Darwin from chapter 6 of the Origin:

“Reason tells me, that if numerous gradations from a simple and imperfect eye to one complex and perfect can be shown to exist, each grade being useful to its possessor, as is certainly the case; if further, the eye ever varies and the variations be inherited, as is likewise certainly the case; and if such variations should be useful to any animal under changing conditions of life, then the difficulty of believing that a perfect and complex eye could be formed by natural selection, though insuperable by our imagination, should not be considered as subversive of the theory.”

The subject quote (given at the top) by Fisher is part of his remarks to expand on the idea, which in the essay followed the Darwin quote.


Text by Webmaster, with quotes from essay 'Retrospect of the Criticisms of the Theory of Natural Selection', reproduced in Julian Huxley, A.C. Hardy, and E.B. Ford (eds.), Evolution as a Process (1954), 91. The short summary form is on p.5. (source)