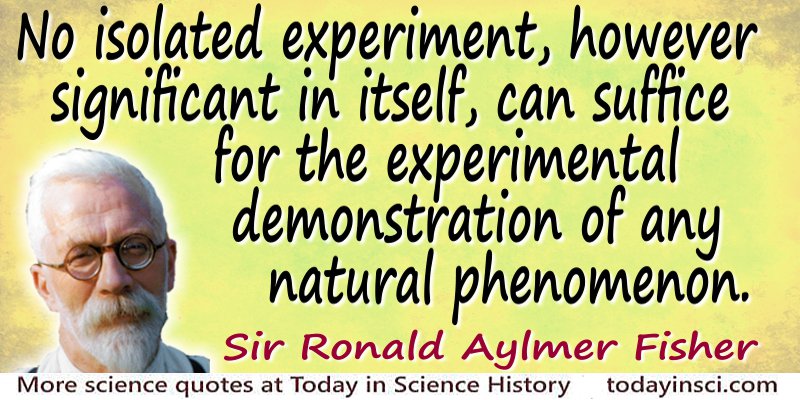 “No isolated experiment, however significant in itself, can suffice for the experimental demonstration of any natural phenomenon.”
— Ronald Aylmer Fisher
From The Design of Experiments (1935)

This quote comes from Ronald A. Fisher’s book, The Design of Experiments in a section subtitled 'The Test of Significance', which begins:

“It is open to the experimenter to be more or less exacting in respect of the smallness of the probability he would require before he would be willing to admit that his observations have demonstrated a positive result. It is obvious that an experiment would be useless of which no possible result would satisfy him.”

Fisher continues with a discussion of the standard level of significance, and the need to eliminate fluctuations in results due to chance. Expanding on this, he writes these sentences from which the subject quote is taken:

“No isolated experiment, however significant in itself, can suffice for the experimental demonstration of any natural phenomenon; for the ‘one chance in a million’ will undoubtedly occur, with no less and no more than its appropriate frequency, however surprised we may be that it should occur to us. In order to assert that a natural phenomenon is experimentally demonstrable we need, not an isolated record, but a reliable method of procedure. In relation to the test of significance, we may say that a phenomenon is experimentally demonstrable when we know how to conduct an experiment which will rarely fail to give us a statistically significant result.”