Gottlob Frege
“The aim of scientific work is truth” 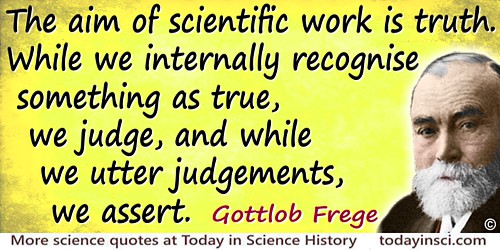 “The aim of scientific work is truth. While we internally recognise something as true, we judge, and while we utter judgements, we assert.”
— Gottlob Frege
From Frege manuscript (after 1879).

To give this quote by Gottlob Frege some context, an insight how he viewed the relationship between logic, truth, and science is expressed by Tyler Burge:1

“Frege saw logic as a scientific language expressing knowledge of a subject matter, in this respect like any other science. He regarded its meaning or content as just as substantive as that of any other scientific language. He took its truths to be just as dependent on relation to a subject matter as the truths of any other science. In fact, he saw logic as the most general science of ‘being.’ … I believe that he used this point of view to make fundamental contributions to understanding logical truth and logical consequence.”