Gottlob Frege
“I compare arithmetic with a tree” 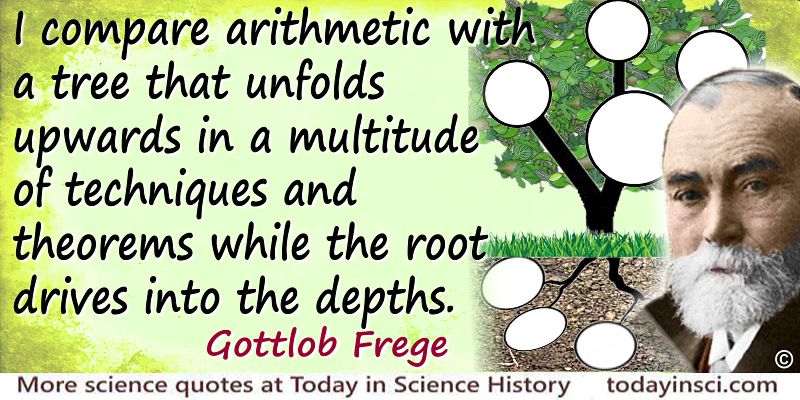 “I compare arithmetic with a tree that unfolds upwards in a multitude of techniques and theorems while the root drives into the depths.”
— Gottlob Frege
Translated from Grundgesetze der Arithmetik (1893).

This is a translation from the original text published in 1893 by the German mathematician, Gottlob Frege, Grundgesetze der Arithmetik. A good context for this quote is given by Michael H. McCarthy:

“Frege’s philosophic career began with his intensive study of the foundations of arithmetic. In the course of his research, he developed a complex of logical beliefs and analytic methods strongly divergent from those of his predecessors and contemporaries. He was driven to philosophical reflection because of his discontent with the theoretical foundations of arithmetic. The mathematicians of his day were more intent on developing techniques and proliferating theorems than with disclosing the underlying conceptual structure of their science.

‘If I compare arithmetic with a tree that unfolds upwards into a multitude of techniques and theorems while its roots drive into the depths, then it seems to me that the impetus of the root, at least in Germany, is rather weak.’

When Frege spoke of the roots of arithmetic he referred to its primitive axioms, elementary concepts, and rules of inference, the logical ground on which axiomization might proceed.”