Jane Goodall - “Cruelty is the worst of human sins” 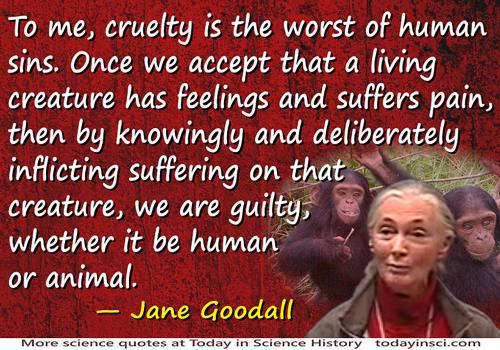 “Cruelty is the worst of human sins. …[By] deliberately inflicting suffering … we are guilty, whether it be human or animal.”
— Jane Goodall
From The Book of Uncommon Quips and Quotations.

This is a quote which the Webmaster has not yet traced to its original source. (Can you help?) It was found in a quote collection that included no citation for its origin.

Jane Goodall has written many books and articles, has often been interviewed for print and TV, and has given numerous lectures. This results from her commitment to make the world more aware of the intelligence of chimpanzees, and the plight of the chimpanzee in their disappearing rain forests. She has travelled widely, lecturing and raising funds for the Jane Goodall Institute so it can continue its efforts to assist wild and rescued chimpanzees.

With such a multitude of places that Jane Goodall has written or spoken, tracking down a given quote is daunting. The full quote as originally found is:

“To me, cruelty is the worst of human sins. Once we accept that a living creature has feelings and suffers pain, then by knowingly and deliberately inflicting suffering on that creature, we are guilty, whether it be human or animal.”

The opening statement that “Cruelty is the worst of human sins,” has no doubt been uttered often by Goodall when expressing concern for animal welfare. These seven words appear in a book review by Steve Dale, for the Chicago Tribune in 1994. He reviewed a book coauthored by historian Dale Peterson with Jane Goodall, Visions of Caliban, (1993). Dale interviewed Goodall by telephone at her home in England. After that comment on cruelty, she continued,

“I don't believe that people are inherently savage and vindictive. They don’t understand. Medical researchers have been taught—actually brainwashed—to believe that animals don't have feelings. Any pet owner knows better.”

The article opened with these remarks by Goodall:

“Five years ago, when I showed slides of chimpanzees dressed up in tutus and ballet shoes, I heard giggles. Today, this is no longer cute, it's horrifying-and people are aware.”

The book gives various chilling examples of cruelty to apes, these close-to-human creatures, whether participants in a circus, biomedical laboratory animals, housed in poor conditions at zoos, or captive in the illicit international trade.


Text by Webmaster, with original quote in the collection by Bollimuntha Venkata Ramana Rao, The Book of Uncommon Quips and Quotations (2003), 12. Additional quotes from interview by Steve Dale, Out of Africa, Chicago Tribune (17 Oct 1994). (source)