Jane Goodall - Some humans are mathematicians 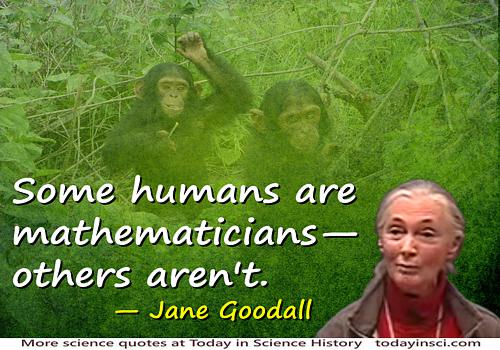 “Some humans are mathematicians—others aren't.”
— Jane Goodall
From In the Shadow of Man

This quote, in fact, was not primarily directed to criticize the ability of some humans as mathematicians, but was only used as an example of how skill sets can vary within a species.

Writing in her classic book, In the Shadow of Man, Jane Goodall outlines the ability of chimpanzees to use tools, such as using stems and sticks to capture insects from recesses. She also describes ways observed in a laboratory setting for chimpanzees making tools—such as fitting tubes together, or uncoiling a wire, to reach food placed outside the cage.

However, even “with tuition” to show how a stone hand axe could break a piece of wood into splinters suitable to obtain food from a narrow pipe, exhaustive tests with one chimpanzee yielded no emulation. However, Goodall notes, many other chimpanzees would need to be tested in the same way before drawing the conclusion that the species in general is unable to perform this act, just as

“Some humans are mathematicians—others aren't.”