Jane Goodall - I want to wander in the wild 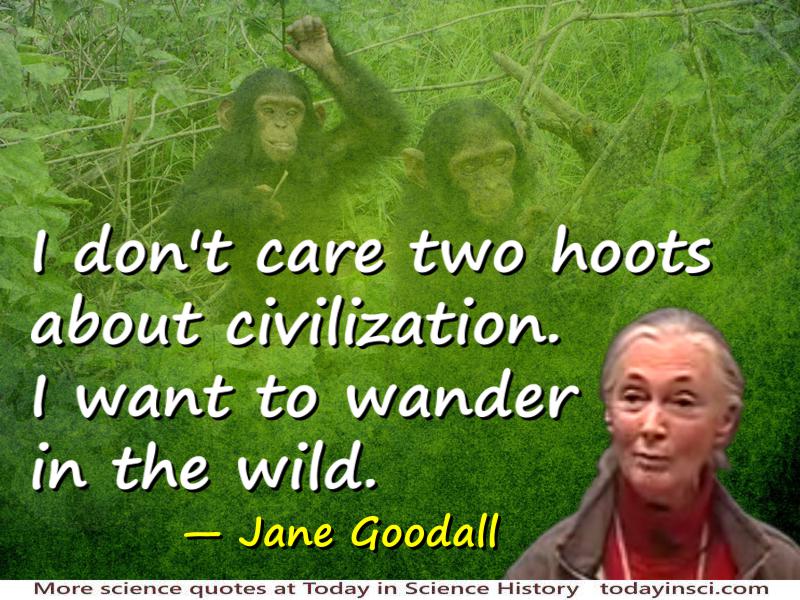 “I don't care two hoots about civilization. I want to wander in the wild.”
— Jane Goodall
Quoted in New York Times

In this quote, Jane Goodall recalled a remark she had made in the past to her mentor,  Dr. Louis Leakey, as quoted by Nan Robertson in the New York Times.

The article featured three of the world’s foremost primatologists (Dian Fossey, Goodall and Biruté Galdikas). They were together at a symposium, 'What We Can Learn About Humankind From the Apes' at Sweet Briar College campus, talking about their specialies: mountain gorillas, chimpanzees and orangutans (respectively).

The article began by saying,

“From the time all three were girls, they wanted to be out in the wilderness, alone with their animals. They have now spent many years in the remotest corners of Africa and Asia, enduring isolation, torrential rains, heat, insects…”

The other two regarded Dr. Goodall as the “pioneer” with (at the time) 20 years in the field, compared to Dr. Fossey for 13 years and Dr. Galdikas.