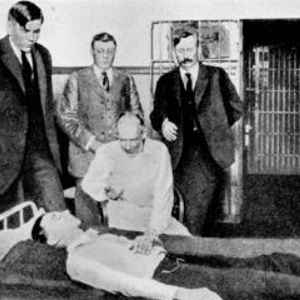 Under the above headline, the New York Times on Wednesday, 22 Oct 1924, reported that “Dr. House of Texas Tells Anesthetists It Makes Convicts Confess Their Deeds” and he advocated its use as an aid for the government to control crime. He claimed a success rate for his tests of over 50% in identifying a criminal.

Dr. Robert House of Ferris, Texas, had presented the results of his 500 tests with scopolamin-apomorphia to the first annual meeting of the Eastern Society of Anesthetists at the Hotel McAlpin. This drug became known as a so-called “truth serum” because of the doctor's experiments. He asserted that, when injected into suspects, it caused the persons under its influence to give confessions to crimes of which they were accused, while others had been cleared of suspicion.

To justify administering the drug, Dr. House said that he regarded its use as humane, and further, he believed that society's rights to employ the drug superseded those of a criminal. “It therefore stands to reason,” he declared, “that where there is a safe and humane method existing to evoke the truth from the consciousness of a suspect society is entitled to have that truth.” [Though this was the doctor's opinion at the time the article was written, by the 1950s, before its use was determined to be a violation of a person's rights regarding self-incrimination.]

The effect of the injected drug, the doctor alleged, left the facilities of hearing and speech intact while causing loss of conscious will-power. The result, he said, was that when hearing questions, a subject under its influence could still be stimulated to talk, but with answers to questions provided as directly from pure memory, unaffected by any volitional control. Thus, the doctor stated, such responses were provided without embellishment, or any ability to lie or give fraudulent information.

The news article quoted Dr. House that in this examination stage,

“the individual does not talk at random, but will reply to a direct question, and you will observe a condition of profound sleep or wakefulness without the ability to reason. This condition is called artificial unconsciousness. An individual will answer all questions, as the answer is stored in his mind, not truthfully but as memory. You will also note that the replies are given with child-like simplicity and with child-like honesty—without evasiveness, guile, deceit or fraud.

When the technique is understood, the technician can prove the guilt or innocence of a suspected criminal. Some replies might be wrong, and they will be wrong if the individual misunderstands the import or the questions, but enough right answers can be obtained to clearly define the results.

Wrong answers may come from an insufficient amount of the drug or if the center of hearing is too deeply anesthetized or by asking too many questions, causing the brain to become tired. All questions must be short and plain; long questions must be subdivided, as the patient may forget them.

Lapses in punctuation in the article as printed leave it unclear whether further statements were actually quoting the doctor's remarks. One described a test that was made in New Orleans. With the assistance of the Secretary of the Parish Medical Society, three reporters, one from each of three newspaper there, attempted to disprove the influence of the “truth serum” administered to them. Although they had previously practiced giving wrong answers to a prepared set of questions, according to the article, “All three admitted defeat” when drugged.

More information given without any quotation marks in the printed text, was that, with the use of scopolomin-apomorphia, Thomas Howell admitted a murder In St. Louis.

“Analyzed in the light of its ultimate consequences three and a half billion dollars spent yearly by our Government for the control of crime does not represent the loss to society in life and property, but it does represent a demand for more instruments for the detection of the criminal. The best percentage of conviction society can show is 10 per cent. Therefore, out of ten ‘truth serum’ tests one could make nine failures and equal all the resources of society. My average to date, allowing for all tests not investigated is over 50 per cent.”

The article ended by reporting that Dr. P. R. Vessie of Gowanda. N.Y., had also spoken about utilizing scopolamin-apomorphia in cases of patients affected by amnesia, and when they could then recall their identity, the loss of memory was cured.


Image added (not in original article) from source shown above, to illustrate Dr. Robert House, who suggested the use of drug scopolamine in criminology. Text written by Webmaster, based on the article in the New York Times (22 Oct 1924), 14.