Thomas Jefferson on Education and Science

Extract from a paper Jefferson presented on 1 Aug 1818 to the board of Commissioners appointed to fix the site of the University of Virginia. They met at the tavern at Rockfish Gap, on the Blue Ridge, Virginia. 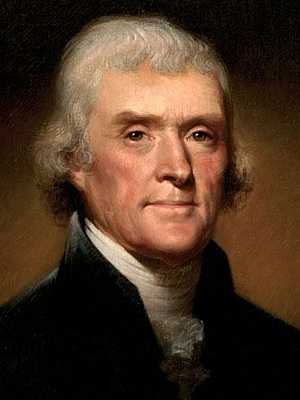 [The objects of the education of all citizens include:]

[p.9] To enlighten them with mathematical and physical sciences, which advance the arts, and administer to the health, the subsistence, and comforts of human life;

Some good men, and even of respectable information, consider the learned sciences as useless acquirements; some think that they do not better the condition of man, and others that education, like private and individual concerns, should be left to private individual effort, not reflecting that an establishment embracing all the sciences which may be useful and even necessary in the various vocations of life, with the buildings and apparatus belonging to each, are far beyond the reach of individual means, and must either derive existence from public patronage, or not exist at all. This would leave us, then, without those callings which depend on education, or send us to other countries to seek the instruction they require.

But the commissioners are happy in considering the statute under which they are assembled as proof that the Legislature is far from the abandonment of objects so interesting. They are sensible that the advantages of well directed education, moral, political and economical, are truly above all estimate. Education generates habits of application, of order, and the love of virtue, and controls, by the force of habit, any innate obliquities in our moral organization.

[p.10] We should be far, too, from the discouraging persuasion that man is fixed, by the law of his nature, at a given point; that his improvement is a chimera, and the hope delusive of rendering ourselves wiser, happier, or better than our forefathers were. As well might it be urged that the wild and uncultivated tree, hitherto yielding sour and bitter fruit only, can never be made to yield better; yet we know that the grafting art implants a new tree on the savage stock, producing what is most estimable in kind and degree. Education, in like manner, engrafts a new man on the native stock, and improves what in his nature was vicious and perverse into qualities of virtue and social worth.

And it cannot be but that each generation succeeding to the knowledge acquired by all those, who preceded it, adding to it their own acquisitions and discoveries, and handing the mass down for successive and constant accumalation, must advance the knowledge and well-being of mankind, not infinitely, as some have said, but indefinitely, and to a term which no one can fix and foresee.

That these are not the vain dreams of a sanguine hope, we have before our eyes real and living examples. What but education has advanced us beyond the condition of our indigenous neighbors? And what chains them to their present state of barbarism and wretchedness but a bigoted veneration for the supposed superlative wisdom of their fathers and the preposterous idea that they are to look backward for better things, and not forward, longing, as it should seem, to return to the days of eating acorns and roots, rather than indulge in the degeneracies of civilization? And how much more encouraging to the achievements of science and improvement is this than the desponding view that the condition of man cannot be ameliorated, that what has been must ever be, and that, to secure ourselves where we are, we must tread with awful reverence in the footsteps of our fathers.

This doctrine is the genuine fruit of the alliance between Church and State; the tenants of which, finding themselves but two well in their present condition, oppose all advances which might unmask their usurpations and monopolies of honors, wealth and power, and fear every change as endangering the comforts they now hold.

Paragraph breaks have been added to the original text to improve readability. From paper 'Report of the Commissioners Appointed to Fix the Site of the University of Virginia' (Dec 1818), reprinted in Annual Report of the Board of Visitors of the University of Virginia for the Fiscal Year Ending May 31, 1879 (1879), 10. Collected in Commonwealth of Virginia, Annual Reports of Officers, Boards, and Institutions of the Commonwealth of Virginia, for the Year Ending September 30, 1879 (1879). (source)