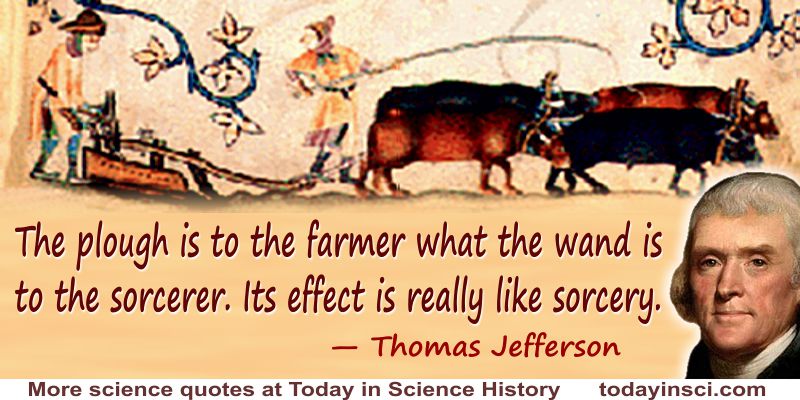 “The plough is to the farmer what the wand is to the sorcerer. Its effect is really like sorcery.”
— Thomas Jefferson
In letter to Charles Willson Peale (1813).

A letter by Jefferson on soil erosion control
and water conservation

Charles Willson Peale (1741-1827), was in his time well-known for his talent as a portrait painter, and for founding the famous Peale’s Museum of Art and Natural History in Philadelphia. But through his life, Peale was a man of versatile talents, including naturalist, taxidermist, politician and silversmith. Peale also had great ingenuity and mechanical skill to make coaches, harnesses, clocks and watches. It is no surprise to find that Thomas Jefferson shared interests and exchanged numerous letters with him, on various subjects.

In a letter, dated 17 Apr 1813, Jefferson gave Peale guidance on how to plough his farmland for best results. In the text of the letter below, Jefferson described best practices in soil and water conservation. He was concerned to stop the use of ploughing methods with straight furrows, that resulted in top soil depletion as it washed off the surface of the fields and into the rivers. The remedy was to plough following horizontally around the contours of the land. The furrows then would also hold water for the benefit of the crops, instead of letting it rapidly run off down the hill.

Thus, the proper ploughing technique would give so much better crop yield, he compared it to sorcery, with the subject quote shown within this letter. Also notice Jefferson’s mathemical mind, as he wrote to Peale:

“Your position that a small farm well worked and well manned, will produce more than a larger one ill-tended, is undoubtedly true in a certain degree. There are extremes in this as in all other cases. The true medium may really be considered and stated as a mathematical problem:

‘Given the quantum of labor within our command, and land ad libitum offering it’s spontaneous contributions: required the proportion in which these two elements should be employed to produce a maximum.’

It is a difficult problem, varying probably in every country according to the relative value of land and labor. The spontaneous energies of the earth are a gift of nature, but they require the labor of man to direct their operation. And the question is so to husband his labor as to turn the greatest quantity of this useful action of the earth to his benefit. Ploughing deep, your recipe for killing weeds, is also the recipe for almost every thing good in fanning.

In the country wherein I live we have discovered a new use for it, equal in value almost to it’s services before known. Our country is hilly and we have been in the habit of ploughing in strait rows whether up and down hill, in oblique lines, or however they lead; and our soil was all rapidly running into the rivers.

We now plough horizontally following the curvatures of the hills and hollows, on the dead level, however crooked the lines may be. Every furrow thus acts as a reservoir to receive and retain the waters, all of which go to the benefit of the growing plant, instead of running off into the streams. In a farm horizontally and deeply ploughed, scarcely an ounce of soil is now carried off from it. In point of beauty nothing can exceed that of the waving lines & rows winding along the face of the hills & vallies. The horses draw much easier on the dead level, and it is in fact a conversion of hilly grounds into a plain. The improvement of our soil from this cause the last half dozen years, strikes every one with wonder.

For this improvement we are indebted to my son-in-law, Mr. Randolph, the best farmer, I believe, in the United States, and who has taught us to make more than two blades of corn to grow where only one grew before. If your farm is hilly, let me beseech you to make a trial of this method. To direct the plough horizontally we take a rafter level1 of this form. A boy of 13 or 14 is able to work it round the hill, a still smaller one with a little hough2 marking the points traced by the feet of the level. The plough follows running thro’ these marks. The leveller having compleated one level line thro’ the field, moves with his level 30 or 40 yards up or down the hill, and runs another which is marked in like manner & traced by the plough, and having thus run what may be called guide furrows every 30 or 40 yards thro the field, the ploughman runs the furrows of the intervals parallel to these. In proportion, however, as the declivity of the hill varies in different parts of the line, the guide furrows will approach or recede from each other in different parts, and the parallel furrows will at length touch in one part, when far asunder in others, leaving unploughed gores between them. These gores we plough separately. They occasion short rows & turnings which are a little inconvenient, but not materially so.

I pray you to try this recipe for hilly grounds. You will say with me, ‘Probatum est,’3 and I shall have the happiness of being of some use to you, and thro’ your example to your neighbors, and of adding something solid to the assurances of my great esteem & respect.”

[[pic4]]
[1 To clarify the use of a “rafter level” an annotated diagram, not in the original text, is shown here. It is a simple A-frame made from light, but rigid, wooden struts (r, s) of suitable length, say 8 to 12 ft each, to form a span of 12 to 20 ft between each foot of the frame. The horizontal member (m, n) is securely fastened about half-way up the legs. A plumbline is attached from the apex. With the legs on known horizontal ground (A, B), a notch is made at the point of contact (e, e) of the string of the plumbline against the crosspiece. To use in the field, the frame is set with the rear foot, A, at the start of the first furrow. A helper, which can be a boy, digs a small hole there with a hoe. The frame can then be swivelled around until the other foot, B, rests on the ground ahead such that the plumbline is on the notch, indicating the two feet are horizontal to each other. Another hole is dug at B. The frame is advanced to find the next point level to the previous hole, and another hole is chopped in the dirt with the hoe. The process is repeated until the end of the furrow is reached. This leaves a series of markers from the piles of fresh dirt from each hole, which can be seen for many yards. The farmer can then guide his plough, following the course of the holes. The hoe is a convenient way to make markers instead of carrying a bundle of stakes or sticks that must be driven into the ground. This use of a rafter level to plough contoured furrows is described in a number of books for farmers through several decades in the nineteenth century.
2 Presumably “hoe.”
3 “It is proven.” —Webmaster.]

Larger diagram of a rafter level, not in original text, added from another source, as shown above. Introductory text by Webmaster, with quote from a single, long paragraph in the letter from Jefferson at Monticello to Charles Willson Peale (17 Apr 1813). A few paragraph breaks were added to help readability on the web page. The full text of the letter appears in The Jefferson Papers: 1770-1826 (1900), 179. (source)