Thomas Jefferson
“The ocean ... like the air, is the common birthright of mankind” 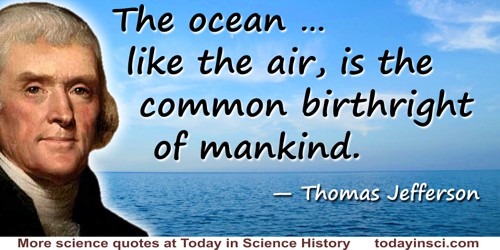 “The ocean … like the air, is the common birthright of mankind.”
— Thomas Jefferson
Reply (1808) to public address of the Society of Tammany, New York.

The New York Tammany Society began in 1789 as a social and benevolent fraternity but it became politically partisan from 17951. It held meetings, parades, “long talks” and toasts to popularize republican principles. It brought together small tradesmen, professionals, merchants and mechanics of Republican persuasion, “defending domestic liberty, preserving national independence.” It did much to bring Jefferson to the presidency, although—as an organization—it did not participate in the campaign of 1800. At almost every important gathering of the Society, they toasted Jefferson, whom they regarded as an “enlightened statesman, the friend of the people and the supporter of their rights.”

On 11 Feb 1808, representing a committee of the Tammany Society, Jacob Van Dervoort wrote to President Thomas Jefferson about commemorating the sacrifice of the countrymen slaughtered in the Revolutionary War.2

Jefferson, on the eve of his resignation as Secretary of State, expressed his concern for the protection of seafaring Commerce in his Final State of the Report on Commerce to the House to Congress (16 Dec 1793), writing:3

“The ocean … is the common property of all.”

When he repeated this theme in his reply to the Society, his context again was the ongoing international conflict on the ocean. Thus the subject quote above is in fact far from being about an environmental perspective of the ocean. However, we can reasonably speculate that if Jefferson knew about the world’s current problems such as over-fishing, pollution, or even climate change, he would be unequivocal in his concern for proper custody of the ocean and atmosphere as resources.

For the record, here is his full reply written by Thomas Jefferson on 29 Feb 1808 to the Society of Tammany or Columbian Order No. 1 of the City of New York:4

I have recieved your address, fellow citizens, and, thankful for the expressions so personally gratifying to myself, I contemplate with high satisfaction the ardent spirit it breathes of love to our country, and of devotion to it’s liberty & independance. the crisis in which it is placed cannot but be unwelcome to those who love peace, yet spurn at a tame submission to wrong. so fortunately remote from the theatre of European contests, and carefully avoiding to implicate ourselves in them, we had a right to hope for an exemption from the calamities which have afflicted the contending nations and to be permitted unoffendingly to pursue the paths of industry & peace. but the ocean, which, like the air, is the common birth-right of mankind, is arbitrarily wrested from us, and maxims consecrated by time, by usage, & by an universal sense of right, are trampled on by superior force. to give time for this demoralizing tempest to pass over, one measure only remained which might cover our beloved country from it’s overwhelming fury; an appeal to the deliberate understanding of our fellow citizens in a cessation of all intercourse with the belligerent nations, until it can be resumed under the protection of a returning sense of the moral obligations which constitute a law for nations as well as individuals. there can be no question, in a mind truly American, whether it is best to send our citizens & property into certain captivity, and then wage war for their recovery, or to keep them at home, and to turn seriously to that policy which plants the manufacturer & the husbandman side by side, and establishes at the door of every one that exchange of mutual labors & comforts which we have hitherto sought in distant regions, and under perpetual risk of broils with them. between these alternatives your address has soundly decided, and I doubt not your aid & that of every real and faithful citizen, towards carrying into effect the measures of your country, and enforcing the sacred principle that in opposing foreign wrong, these must be but one mind.

I receive with sensibility your kind prayers for my future happiness, and I supplicate a protecting providence to watch over your own and our country’s freedom & welfare.