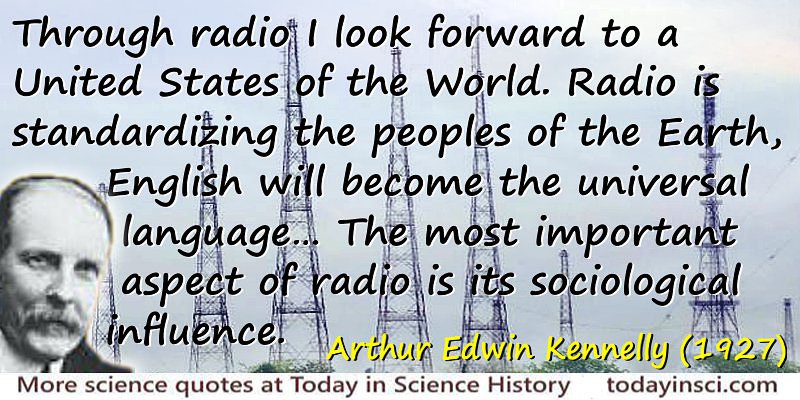 “Through radio I look forward to a United States of the World. Radio is standardizing the peoples of the Earth, English will become the universal language… The most important aspect of radio is its sociological influence. ”
— Arthur Edwin Kennelly
As quoted in Orrin Elmer Dunlap, Radio's 100 Men of Science.

Orrin Elmer Dunlap provides this quote, from Kennelly in 1926, without citation in his book, Radio's 100 Men of Science: Biographical Narratives of Pathfinders. The full quote reads:

“Through radio I look forward to a United States of the World. Radio is standardizing the peoples of the Earth, English will become the universal language because it is predominantly the language of the ether. The most important aspect of radio is its sociological influence.”

Together with Oliver Heaviside, Kennelly shares recognition for describing the role of an atmospheric layer in the Earth's ionosphere in bouncing a radio signal over the horizon, instead of the signal merely travelling in a straight line from the transmitter and disappearing out into space. This enormously useful property of the Kennelly-Heaviside layer made shortwave radio communication possible between places remote on the curvature of the earth for which no line-of-sight path was otherwise possible.

Kennelly had used the expression, the “United States of the World,” several years earlier, in 1920, in an article he contributed to Electrical World. This was written not long after the end of the Great War (World War I) of 1914-1918. Kennelly said about the war that “by its division of mankind into two great opposing factions it has embittered all human relations across the rift.” As a professor of Electrical Engineering at Harvard University, and director of the Research Division of the Department of Engineering at Massachusetts Institute of Technology, described the state of scientific research in the engineering schools. There, he said, post-war constructive impulses were being directed to lighten the “after-burden of the conflict,” which “on the material side” aimed at increasing production and productivity. He continued:1

“On the non-material side they are directed toward closer fellowship between the allied peoples, greater understanding and trustfulness between nation and nation, in the direction a final United States of the World.”


Text by Webmaster with quote as it appears in Orrin Elmer Dunlap, Radio's 100 Men of Science: Biographical Narratives of Pathfinders (1944), 131, where it appeared without citation. (source)