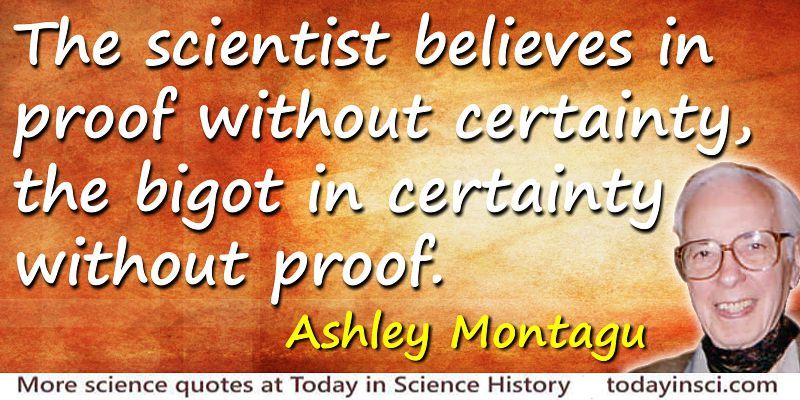 “The scientist believes in proof without certainty, the bigot in certainty without proof.”
— Ashley Montagu
In Science and Creationism (1984).

As editor, Ashley Montagu wrote an Introduction to a compilation of essays denouncing creationism, with contributors including Stephen Jay Gould and Isaac Asimov, called Science and Creationism. One reviewer described the book as, “One of the most substantial and scholarly counterattacks against creationism to date.” Montagu wrote his own criticism of the fundamentalists attempting to impose their beliefs in public school classrooms. He said they “have no right … under the guise of ‘creation science’… to smuggle the teaching across the borders guarded by the First Amendment of the Constitution.” Montagu rejected any idea that the manipulations of the fundamentalists held up to the methodical scrutiny of science, saying:

“Truth is only the daughter of Time.”

Responding to the unquestioning belief of the fundamentalists and their rigid defense of it, Montagu used the word “bigot” to describe any such person who is narrowly or intolerantly devoted to his or her opinions and prejudices. He recalled that

“It was Oliver Wendell Holmes, Sr., who likened the bigot to the pupil of the human eye: the more light you expose it to the narrower it grows. Bigotry and science can have no communication with each other, for science begins where bigotry and absolute certainty end. The scientist believes in proof without certainty, the bigot in certainty without proof. Let us never forget that tyranny most often springs from a fanatical faith in the absoluteness of ones beliefs.”

The book was published shortly after a court decision in Georgia soundly rejected Creationism as science, and its religious basis had no place in a school curriculum. Of course, the fundamentalists wouldn't take “No” for an answer and regrouped around a new presentation as “Intelligent Design.” School Boards and politicians can be seduced by persistent efforts of the fundamentalists, so a constant vigilance continues to be needed.

As this web page is written, it is the lamentable state of affairs that in the U.S. Congress, there are almost no scientists in their ranks. Worse, there are scientific deniers on the very science and technology committees that are responsible for crafting national laws.

The denial of climate change by certain politicians, disregarding the vast preponderance of scientific analysis, is further evidence that, as Montagu wrote,

“The scientist believes in proof without certainty, the bigot in certainty without proof.”

The more the polarized U.S. Congress fails to support research, turns its back, and squanders the advantages of scientific knowledge, the sooner more diligent nations of the world will eclipse America in science and technology. Once that lead is lost, it will be too late.