Ashley Montagu
“Certainty is never an end, but a search” 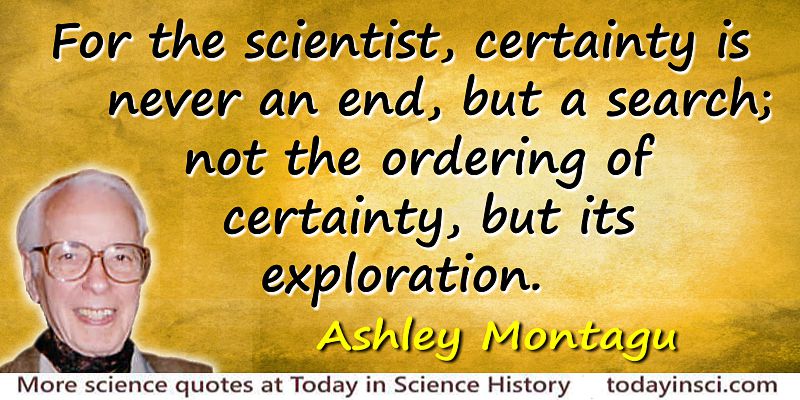 “For the scientist, certainty is never an end, but a search; not the ordering of certainty, but its exploration.”
— Ashley Montagu
In Science and Creationism (1984).

As editor, Ashley Montagu wrote an Introduction to a compilation of essays denouncing creationism, with contributors including Stephen Jay Gould and Isaac Asimov, called Science and Creationism. One reviewer described the book as, “One of the most substantial and scholarly counterattacks against creationism to date.” Montagu wrote his own criticism of the fundamentalists attempting to impose their beliefs in public school classrooms.

Montagu contrasted the basis of true scientific investigation with the fundamentalist who assert their certainty based on faith alone. Using the word “bigot” to describe a person who is narrowly or intolerantly devoted to his or her opinions and prejudices, he wrote:

“The scientist believes in proof without certainty, the bigot in certainty without proof.”

He continued, “I am not aware of any observations or experiments that the "Scientific Creationists have carried out in order to support or reinforce their claims, and therefore there must be the strongest objection to their terming what they are doing ‘science’ and to calling themselves scientists.”

“As a scientist, no scientist can be a fundamentalist in his attitude toward truth. Scientists do not believe in fundamental and absolute certainties. For the scientist, certainty is never an end, but a search; not the ordering of certainty, but its exploration. For the scientist, certainty represents the highest degree of probability which attaches to a particular judgment at a particular time level, a judgment or conclusion that has been arrived at by experiment, inference, or observation, for all good observation and inference, in fact, involves experiment of some sort, by a consensus of independent scientists. Scientists … believe that all knowledge is infinitely perfectible.”

The book providing these quotes was written in 1985. Thirty years later, the same words ring true concerning the effects of climate change that is already in progress. Industries unwilling to reform their polluting practices evade addressing what science has identified as the highest probability. Naysaying politicians and partisan media object every way possible to ridicule the lack of certainty. But Science deals with the highest probability, and in the case of climate change, has refined that understanding over decades.

The naysayers want to continue to jaw-bone as in a fatuous “debate,” to deny the reality of proof, and marginalize scientists. This approach has been called the “War on Science.”

Interestingly, this same label was used nearly two centuries ago. In 1836, an article in The Knickerbocker, a New York magazine, was titled “Warfare of Misguided Zeal upon Science.”1 The pages were captioned “Warfare upon Science,” which is of course, essentially the same as today's name of the “War on Science.”

The Kickerbocker article outlines the motivations and strategy of those opposing science, and they are prescient in their similarity to the tactics of today. The article begins by quoting the even earlier words of Malebranche on the enemies of truth:2

“The hypocrites make use of the appearance of sacred truths, revered by all the world, in order to oppose new truths, by particular interests; they attack truth with the image of truth; and, in their hearts, make a scoff of what the world respects; they establish, for themselves, in the minds of men, a reputation the more solid and the more formidable, as what they thus abuse is more sacred. These persons are, then, the strongest, the most powerful, and the most formidable enemies of truth.”

The next quote from the article is even more clearly a reflection of today’s War on Science, says Franz Gall:3

“There is a kind of objection which new truths never escape. Ignorance, prejudice, envy, and often bad faith, endeavor to combat these truths. If they cannot attack the principles of a doctrine, they try, at least, to render it suspected, by the dangerous consequences of which they accuse it.”

In the case of climate change, the attackers’ “image of truth” is the claim to natural cycles in eras (before man’s pollution). The “dangerous consequences” are now claims of billions of wasted dollars on unnecessary pollution controls, meaning greatly increased utility bills, and of course, increased taxes.