House of Commons Inquiry on Scutari 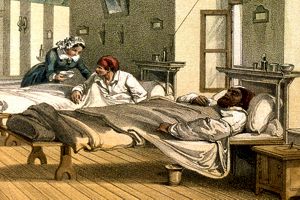 Detail from 1856 lithograph of one of the wards of the hospital at Scutari during the Crimean War after the arrival of Florence Nightingale. Artist William Simpson (1823-1899). (source)

[p.342] The articles I supplied,1—as shown in the list I have furnished,—I supplied on the demands of medical officers in charge of wards, countersigned by staff surgeons of divisions.

Before complying with such requisition, I always inquired of the purveyor whether there were in his store any of the articles demanded. If he answered that there were none, then in most instances I went to the purveyor and asked him whether he expected any from England, or was about to get them from Stamboul. I went sometimes to the purveyor-in-chief, Mr. Wreford, sometimes to Mr. Stewart. Upon getting a negative answer, I issued them, if I had them in my store, or procured them in Stamboul. If the things were in the purveyor’s store, I obtained them from him upon written requisition. The articles so obtained are shown on the list.

I have had my washing establishment since the 30th November. I employ from four to twelve soldiers’ wives and widows there. They wash soldiers’ shirts,—flannel and cotton,— socks, a few sheets, bandages, and drawers. On the 9th November we received the wounded after Inkermann. They were without shirts. I issued about 500. Before doing this I inquired of the purveyor whether he could supply them, and he said he could not The purveyor was Mr. Wreford. This led to my finding out that other men who had been in hospital previous to Inkermann were without shirts, and I supplied about 700 more. This was during the first week. At the end of the first week the men informed me, that they still had the same shirts on. I inquired of Mr. Stuart, and found there was a contractor and a place for washing shirts. I did not interfere further for some days. At the end of that time I went with Mr. Bracebridge to Mr. Stuart, who told me the man had broken his contract, but that he was about to come to some fresh arrangement. He erected a barrier, and ordered a sergeant to collect the shirts within it Whether the shirts were collected or not I do not know; but at the end of a fortnight, I, still finding the men were without change, went to him again. He told me that the contract had fallen through, and he gave the order that the shirts should be collected and distributed among four soldiers’ wives. On the 20th day after Inkermann, a great number of those who had got shirts on the 9th, were still with the same shirts on their back. I inferred that the four soldiers’ wives were not sufficient for washing the shirts, and I took a house at Scutari, provided it with boilers, which I obtained, partly from the engineer officers, partly from my own resources, and employed some soldiers’ wives to wash. I gave notice to the staff surgeons, that there was such an establishment, if they chose to have their patients’ shirts washed. I was told by the non-commissioned officers, that the men had been unwilling to give up their shirts to be washed either by the contractor, or by the soldiers’ wives, because, they said, they either did not get back any shirts at all, or they got a bad one in place of a good one. I also found, that the washing of the soldiers’ wives was quite insufficient They washed in a tub, generally in cold water; and it is necessary that shirts in hospital should be boiled, because it is impossible to get out, otherwise, the animal matter. This is particularly detrimental, when A gets B’s shirt I believe the surgeons of divisions ordered their wardmasters to collect the dirty shirts, and to send them to my establishment. I made a fresh issue of shirts, in order to enable them to comply. The number washed, has varied, from 50 to 800. I was struck with this, and on inquiry, I was told by a wardmaster, that the purveyor had told him to take the shirts to the soldiers’ wives. It appeared to be optional with the wardmaster, whether he should obey the surgeon or the purveyor. I have now, from 500 to 800 pieces a week. I think the shirts come, generally, from the same quarter. Each wardmaster delivers up his shirts to me, and I give him a receipt. I do my best to ensure the return of the identical shirts. I direct that the shirts of each wardmaster shall be washed in a separate tub. I obtained the tubs from the purveyor. The men are not, now, properly supplied with clean shirts. There are several reasons for that. I have patients, at this moment without shirts. The number of those wholly without shirts does not exceed ten; but there is not a sufficient supply for the hospital. The men who come [p.343] from the Crimea are in such a state of filth, that the shirts have to be cut off from them; and when they leave the hospital, they are allowed to take away the shirts on their backs. I could not refuse it. Another reason for the insufficiency of clean shirts, is, that the soldiers’ wives employed by the purveyor have no means of procuring hot water, or other conveniences, for washing. I have heard of a woman giving a man a pint of porter, to get her some hot water. In my establishment, I could do any amount of washing; but, in this climate, we cannot dry without wringing machines. These I expect daily from England.

I have observed how the bedding which is washed by contract is washed. The blankets come back torn and covered with stains. I have, myself, sorted these blankets, when taking in sick, and been compelled to throw away the so-called clean blankets, till they could be carried away and destroyed. They also come so wet, that I am obliged to have them dried before they can be used.

With respect to the articles in the lists which are properly apothecaries stores,2 I applied to the apothecary before issuing them. I put the same questions as I did to the purveyor. As for stump pillows, I got from him oil cloth enough to make about two dozen. The medical officers complained that the quality was bad, that the oil was decomposed by the discharge from the wounds of the patients.

As to medical comforts,3—the beef we have always had from the purveyor. The chickens were sometimes so bad, that I have often had to return them to the purveyor. He said he could get no better. Our cook could not make soup with them; so, to make soup, I was obliged to get others. Arrowroot has been supplied to me in part by the purveyor. Only on one occasion did he give me half the quantity I asked for; on the others, he always gave me the quantity I asked, but our own arrowroot was much better. For the sick it is important to have the best. The sago I asked for of the purveyors, but did not get. The lemons also they declined giving me. The milk was so bad, that I could not use it for sick cookery, and I could not get enough; so I always supplied it myself.

The port wine was declined. The medical officers came to me from different divisions, and said the port wine was bad, and asked me for some. This has frequently happened. The same with the brandy. Brandy was never refused to us, but it was bad. The medical officers asked me for it. The eggs I used to get from the purveyor. About two months ago my requisitions for them began to be refused. When my requisitions had been declined a considerable number of times, I ceased to apply, and have ever since supplied the eggs from private sources. They have been very scarce, and very dear during that period; so has milk, so have chickens.

Footnotes have been moved from the bottom of pages, numbered and listed together at the end of the text above. Text from the House of Commons Inquiry on Scutari (20 Feb 1855). In Great Britain Parliament, Report upon the State of the Hospitals of the British Army in Crimea and Scutari, House of Commons Papers (1855), Vol. 33 of Sess 1854-55, 342-343. (source)