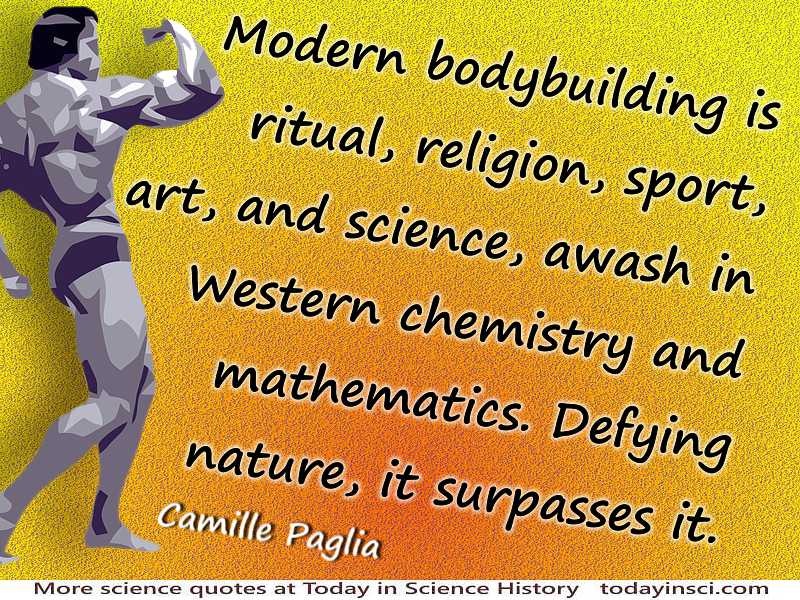 When Camille Paglia wrote a book review on Muscle: Confessions of an Unlikely Bodybuilder by Samuel Wilson Fussell, she began by stating that after Sam had immersed himself in the sport, he described his experience in a book that she wrote “is the vivid, lively record of his four sweaty years in the strange underworld of gyms, trainers, dumb-bells, and steroids.”

“It’s a kind of beefcake Alice in Wonderland.”

He began with a gargantuan feeding regimen and a daily dose of 108 vitamin tablets. His peronality changed, he lost his job, but was obsessed with muscle-building. He is propelled into a “Faustian bargain” seeking competitive success, confessing, “I was my own alchemist,” launched on a relentless intake of chemical strength enhancers and growth hormones, risking serious side-effects or possible death. He witnessed the testosterone-induced “Roid rage” among lifters who injected—“shotgunned”—steroids into their scarred buttocks.

After a few years, never reaching the first place in competition that he craved, he managed to break himself free from his self-abusive “addiction” to the “iron disease.” Paglia began to summarize with:

“Again and again, this book confirmed my theories about masculinity and Western culture. A woman simply is, but a man must become. Masculinity is risky and elusive.”

Bodybuilders, reports Fussell, imitate onstage the Farnese Hercules and Michelangelo David in a quest for “The Apollonian Ideal” for their own sculpted outline. To Paglia, it is a “protest against nature. The quest for masculinity recapitulates the birth of civilization and the history of high art. Modern bodybuilding is ritual, religion, sport, art, and science, awash in Western chemistry and mathematics. Defying nature, it surpasses it.” Paglia's final verdict on the book is that:

Camille Paglia quote on Science and a Single Thunderbolt >>