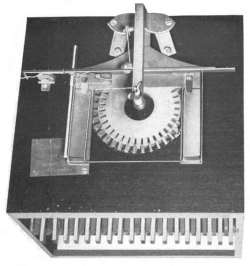 This is a top view, showing the brass disk, slotted and connected with the type bars, also the platen, consisting of a metal bar rigidly fastened to the frame of the machine, and extending to the center of the aperture in the disk with sufficient common surface for each letter to strike at a common center; also showing the flat paper frame moving beneath the ribbon and platen, the paper being clamped at each corner of the frame. The ribbon movement apparatus having been lost or mislaid is not shown on the model. It consisted of spools fastened on each side of the frame, attached to the carriage movement in such manner as to move and present a fresh surface with each stroke of the key, and automatically reversing when the end of the ribbon was reached.