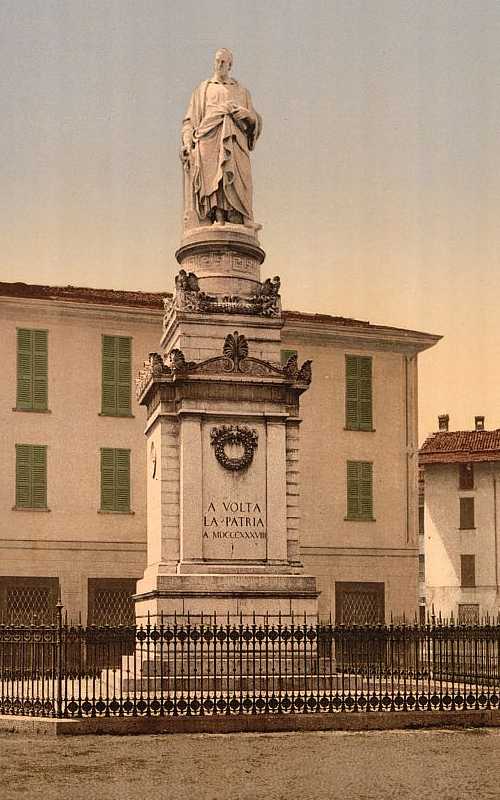 On 29 Apr 1878, “a monument, in memory of the great physicist, Alessandro Volta, was unveiled at Pavia. Most of the Italian Universities, and several foreign scientific societies had sent deputies to Pavia University for this event. The monument is a masterpiece of the sculptor Tantardini of Milan. The ceremony of unveiling was followed by a dignified celebration at the University, and upon that occasion the following gentlemen were elected honorary doctors of the scientific faculty: Professors Clerk Maxwell (Cambridge) and Sir W. Thomson (Glasgow); M. Dumas (Paris), Dr. W. E. Weber (Leipzig); Professors Bunsen (Heidelberg) and Helmholtz (Berlin), Dr. F. H. Neumann (Koenigsberg), and Dr. P. Riess (Berlin).”

[Alessandro Volta was a physicist at the University of Pavia. The memorial was unveiled about 51 years after his death. The image is not a colour photo, but actually a richly colored Photolithograph c.1890-1900, by Detroit Publishing Company (1905), in the Library of Congress Photochrom Prints Collection. ]