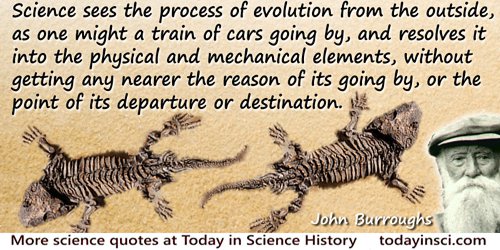 “Science sees the process of evolution from the outside, as one might a train of cars going by…”
— John Burroughs
'A Prophet of the Soul' (1916)

This quote comes from a chapter in Under the Apple Trees which John Burroughs chose to entitle, “A Prophet of the Soul.” He uses that line from Emerson, to introduce an essay on the philosophy of Henri Bergson. Burroughs says of Bergson, “that he is the friend and aider of those who would see with the spirit and enter into the mystery of creation through intellectual sympathy or intuition, instead of making the vain attempt to do so through the logical and scientific understanding.” Of Bergson’s essays, Burroughs admires “Creative Evolution” as a masterpiece, and finds it inspiring. His own view parallels Bergson’s position, Burroughs explains, saying:

“Descriptive science is powerless to portray for me the bird or the flower or the friend I love; only art and literature can do that. Science deals with fixed concepts, art with fluid concepts.”

Applied to the story of organic evolution, Burroughs says Bergson applies his “creative and sympathetic way,” and not

At this point, Burroughs makes his statement, which is the subject quote, to introduce his own philosophical view of organic evolution:

“Science sees the process of evolution from the outside, as one might a train of cars going by, and resolves it into the physical and mechanical elements, without getting any nearer the reason of its going by, or the point of its departure or destination.

Intuition seeks to put itself inside the process, and to go the whole way with it, witnessing its vicissitudes and viewing the world in the light of its mobility and in determinateness.

All the engineering and architectural and mechanical features of the railway and its train of coaches do not throw any light upon the real significance of railways. This significance must be looked for in the brains of the people inside the coaches and in the push of the civilization of which they are some of the expressions. In like manner when we have reduced biological processes to their mechanical and chemical equivalents, we are as far as ever from the true nature and significance of biology.

Organic evolution is something more than an illustration of the working of the laws of dead matter. A living body is the sum of its physicochemical factors, plus something else. The dead automatic forces of the earth went their round of ceaseless change for untold ages without escaping from the grip of mechanical necessity in which they were held; then there came a time when the spell was broken and the current of life arose. We have to speak of the event in this anthropomorphic way, as if it were an event, as if there were discontinuity somewhere, as if the creative spirit began its work as we begin ours. But evidently life did not begin in our human, practical sense, any more than the line we call a circle begins, or any more than the sphere has ends and boundaries. Our logical faculties, cast in the moulds of our experience, fail to grasp these problems. Life is, and, in some inscrutable way, always has been, and always will be, because it is one with the cosmic spirit.”